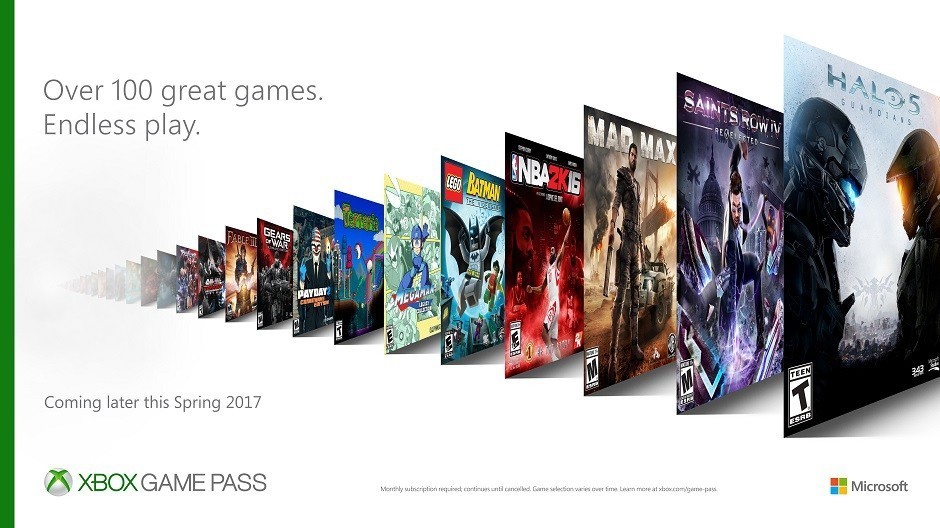 Microsoft announced today a big initiative for its gaming efforts in the form of Xbox Game Pass. The new “Netflix for games” service allows user to pay a flat fee of $10 per month and get access to a catalog of 100 gaming titles.

Phil Spencer talked about Xbox Game Pass today, saying the service is a new, affordable way for gamers to enjoy a vast catalog of titles from the Xbox 360 and Xbox One generation of titles. Similar to Sony’s PlayStation Now program, gamers will get monthly access to these titles, though Microsoft says the catalog of games will change over time.

However, unlike Sony’s offering, which relies on streaming, Microsoft will actually let gamers download the titles to their devices and play them locally. It’s an interesting approach, closer to what EA is doing with its own Vault service.

The company hasn’t yet announced a full list of gaming titles that will be available once the service goes live this Spring, but it has said that its Halo titles and part of the mix and that games from THQ, 2K, Codemasters , 505 Games, Deep Silver, BANDAI NAMCO Entertainment, Capcom, Focus Home Interactive, Sega, SNK, , Warner Bros. and Microsoft itself will all be included in the list.

In terms of pricing, Microsoft is sticking with a flat $10 fee per month, and you’ll get to play the titles you want for as long as you keep paying the subscriptions or they’re part of the catalog. If gamers want to hold on to a certain title they’ll have the chance to purchase it at a discount. As a point of comparison, Sony’s PlayStation Now is more expensive on a monthly basis at $20, but does come out cheaper, at $100 total, if you purchase for a full year.

It’ll be interesting to see more details about Xbox Game Pass, for example how the service interacts with the Gold subscription, as we get closer to its official launch later this Spring. Until then, select members of the Xbox Insider Program will get to try out the service in beta.