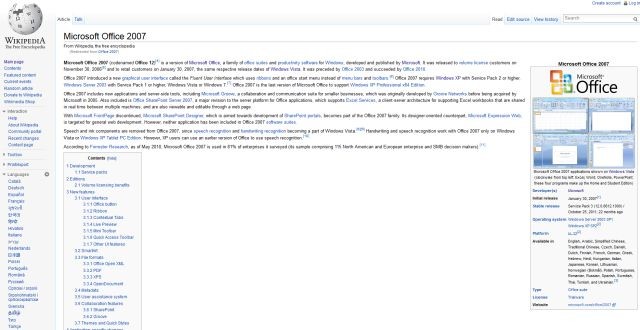 LeakID, on Microsoft's behalf, asked Google to remove the Wikipedia page for Office 2007 from its search results.

Microsoft has been caught sending out mistaken DMCA takedown requests to Google in the past, but this week the company decided to take some action after a French company, LeakID, made some rather embarrassing website removal requests on behalf of Microsoft last week.

TorrentFreak reports that LeakID had asked Google to remove sites from its search results that included several pages from Microsoft's own website, along with the Wikipedia page for Office 2007. Google, thankfully, figured out that LeakID's requests were not correct.

That was apparently the last straw for Microsoft in terms of working with LeakID on takedown requests. The story has a statement from a Microsoft spokesperson saying:

Microsoft is committed to ensuring that enforcement measures are appropriate and completely accurate. We are investigating the circumstances of this takedown and have instructed the vendor that it is no longer authorized to send notices on our behalf.

Google's own Transparency Report shows that Microsoft, or one of its third party companies like LeakID, have requested over 10 million URLs be removed from Google's search results in the past year, putting it in fifth place among the top companies that have made such pleas to the search site.