Microsoft announced Windows Autopilot back in 2017 as part of Windows 10 version 1703 (Fall Creators Update). The service is aimed at helping enterprise admins deploy and manage Windows 10 devices by using a “cloud-configuration”. While the tool supported the deployment and management of traditional laptops, tablets, and desktops, Microsoft today announced that it is bringing Windows Autopilot for HoloLens 2 in private preview.

Microsoft announced the HoloLens 2 back in February last year and started shipping the devices only in November 2019. The firm says that the holographic computer is commercial-ready with “support for Azure AD, mobile device management (MDM), kiosk mode, always-on BitLocker, Windows Update for Business, and Microsoft Store for Business”. With Windows Autopilot for HoloLens 2, customers that order these devices in larger numbers can easily deploy custom configurations and applications through the tool, which the company calls a critical part of Microsoft Endpoint Manager.

With an increase in the adoption of the device, the company says that its customers find it challenging to deploy these holographic computers at scale. Windows Autopilot for HoloLens 2 simplifies the deployment as the private preview of the service supports self-deploying mode with Azure AD. The company has provided a few images to easily illustrate the process of configuring and deploying using Autopilot for the configuration of the devices. 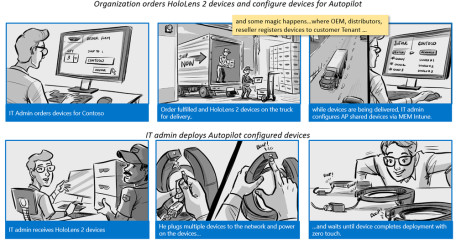 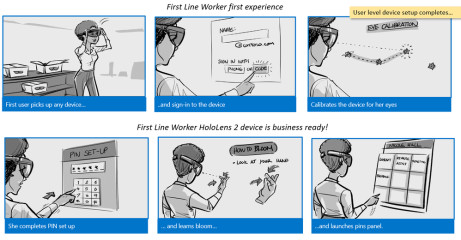 The deployment scenarios that Windows Autopilot for HoloLens 2 supports in private preview include:

Microsoft adds that in the coming months, the HoloLens 2 will be shipped as "Windows Autopilot ready". The devices will come with a Windows product key ID (PKID) barcode printed on the outside of the box, making it easier for Autopilot device registration. Those interested can head here for more information.

Windows Autopilot works on HoloLens 2 devices running Windows 10 build 19041.1002.200107-0909 or later. It is interesting to see deployment support for the HoloLens 2, one of the first Windows devices running a form of Windows Core OS on an ARM processor. You can head to the company’s blog post here for information about getting started with the private preview.