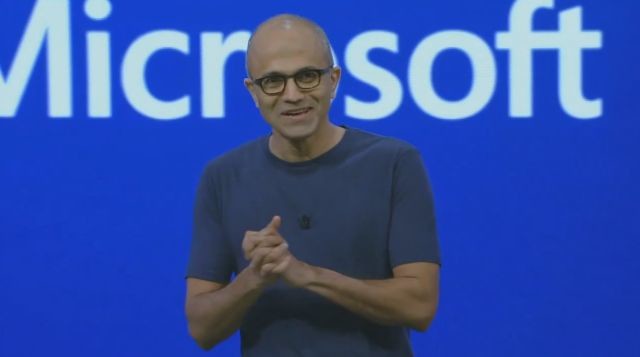 Microsoft ended its BUILD 2014 keynote address today with an appearance by its recently appointed CEO Satya Nadella. In an unusual move, Nadella took some time during his part of the keynote to answer questions from third party developers.

One of them came from an Android developer who simply asked why he should consider developing for Windows. Nadella responded by saying, "You want to build for Windows because we are going to innovate with a challenger mindset." He said that the company is going to create a broad platform that will be attractive to developers and that Microsoft will be doing that themselves with things like the upcoming touch-based Office for Windows.

Another developer wanted to know if apps made with Microsoft tools can be used on other platforms. Nadella said that it will be a priority for Microsoft to give developers a chance to not waste a ton of time or work porting apps to other platforms. That may be one of the reasons why Microsoft is now offering WinJS as an open source project.

Yet another question asked how Microsoft will compete in the tablet space with Apple's iPad and the many Android devices. Nadella said that tablets have to have four things to be successful; the best hardware, the best software, the best apps and solid price point. The upcoming Windows 8.1 update will be a big step towards making tablets like Microsoft's Surface more competitive. He also said that Microsoft will also continue to innovate for future Surface products.

Nadella also said that Microsoft is working on making its APIs more consistent across platforms, and that it will be a big focus to improve that situation in the future.

The final question came from Microsoft's new digital assistant Cortana, who asked Nadella if he wanted to be Master Chief Executive Officer. Nadella said that he should be asked that question again in 500 years, at which point Cortana said she would remind him on April 2nd, 2514.