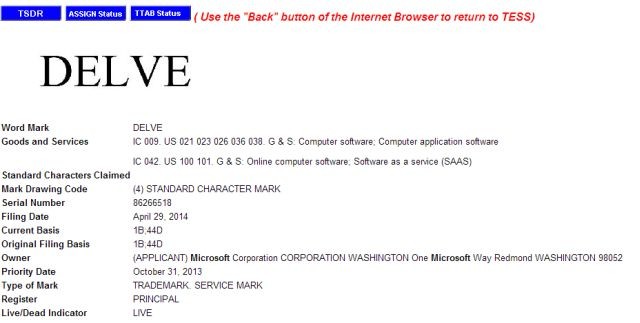 Microsoft has been quite busy on the trademark front lately, as it has filed for a number of gaming-themed terms over the past few weeks. Now it appears that the company has filed for yet another U.S trademark, but this one is for a more serious product.

In a filing made last week with the U.S. Patent and Trademark Office, Microsoft put in an application to claim the term "Delve." The listing said only that it was for "Online computer software, Software as a service (SAAS)." This would seem to indicate that "Delve" is a name for a non-gaming related product, but exactly what that is has yet to be revealed. We have contacted Microsoft to see if they wish to comment.

A few months ago, Microsoft filed to claim trademarks for "Microsoft Mod", "Windows Mod" "Office Mod" and "Microsoft Office Mod," but so far those names have yet to materialize on any public products.

In related news, Microsoft also filed last week for a U.S. trademark for "KI", which appears to be another gaming-related term. This weekend, it was revealed that a previously filed game trademark, "Snap Attack," is in fact a new word game from the creators of Wordament. It is reportedly planned for release Tuesday for Windows and Windows Phone.