Motion controlled gaming really hit the ground running with the introduction of the Wii and the Wiimote. Microsoft, well they went one better when they introduced Kinect – no motion sensitive controller needed, just you and whatever limb you’d like to bring! But what else could Microsoft do to better the gaming experience? 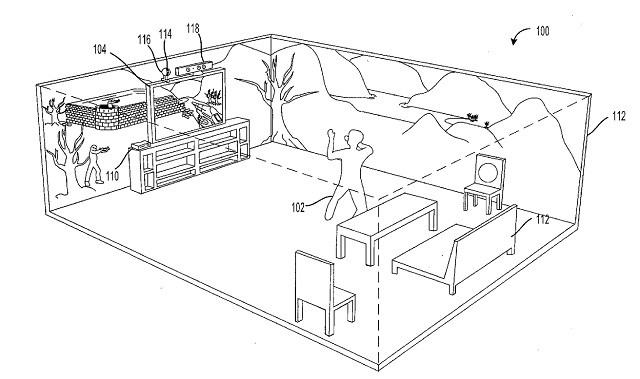 While it’s now known that the Xbox One will require a Kinect (at least for now, if rumours are to be believed), one of the next big gaming gimmicks has already been getting the patent treatment with the US Patent and Trademark Office (USPTO).

The recently applied for patent, details how two cameras capture a space and project images back into the same space as an “integrated interactive space.” It’s also known as Illumiroom and it works with or utilizes Kinect to get its job done.

Now, Microsoft has shown it off already and we even reported on the technology before it was known as Illumiroom. But for the moment, it’s only Microsoft Research that is getting to go over the tech, work with its limitations and refine it for whatever use they see fit. But if the patent application is related to Kinect, we should eventually expect all things gaming to become even more interactive.

Source and image: USPTO
Via: Engadget