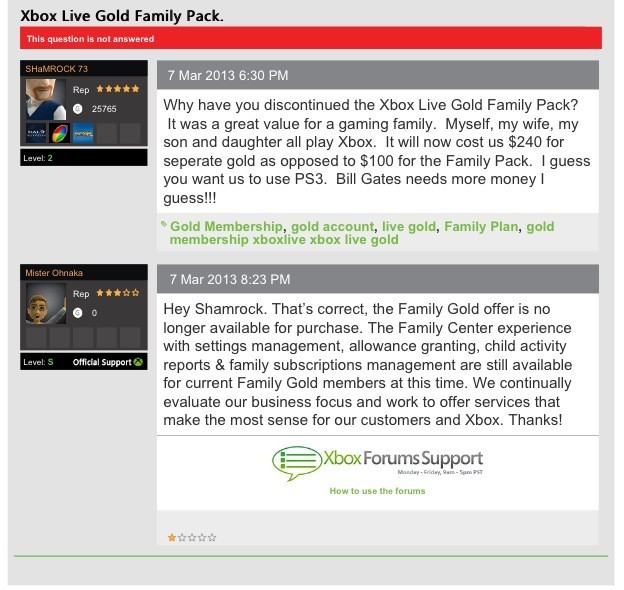 In March, Microsoft quietly stopped taking new orders for its Xbox Live Gold Family Pack for the Xbox 360. The plan was supposed to save families some money by giving them four 12-month accounts for Xbox Live Gold for $99.99 a year, less than half the price if each account had been purchased seperately.

Today, Microsoft started sending emails to current Xbox Live Gold Family Pack subscription members, telling them that each activated account in their pack will be converted to an individual Xbox Live Gold membership starting on August 27th; more details about the change have been posted on a FAQ page on the Xbox.com website.

Each individual Xbox Live Gold account will still have the same amount of time remaining before they are scheduled to expire, but Microsoft is being generous enough to add three months of additional time to each account.

Microsoft says that one of the features that will be lost in ditching Xbox Live Gold Family packs is the ability to check out activity monitoring reports for each account in the pack, in an attempt to give parents a chance to see what their kids are doing on the Xbox 360. Microsoft says that other parental controls for the Xbox 360 and Xbox Live are still in place. Microsoft is also ditching the ability to transfer Microsoft Points to other members of the family pack, but as we have reported before, Microsoft Points will soon be done away with completely in favor of real world currency.

As far as the reason why Microsoft is making this move, the FAQ page is a bit vague on that point, stating simply that this conversion is being designed to "prepare for new and exciting upcoming benefits and features on Xbox Live Gold."

As we reported earlier today, Microsoft's upcoming Xbox One console will have what it calls Home Gold, which will allow Xbox Live Gold subscribers to share any games and apps on their console with anyone at their home will full Xbox Live Gold features like multiplayer online gaming and more.