On day two of PDC09, Windows and Windows Live Division President Steven Sinofsky took the stage and announced that all of the PDC09 attendees (full conference attendees only) will be receiving a free Acer Aspire 1420P Convertible Tablet PC.

The free give away was to show Microsoft's gratitude towards all of the PDC attendees and the support that developers have given Microsoft during the Windows 7 release.

The guys over at windowsteamblog.com were able to get exclusive hands on of the free Acer PDC laptop: 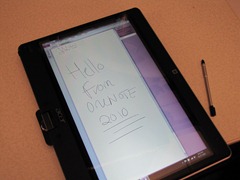