If you have a business subscription to Office 365, you can now store a lot more files and folders on SkyDrive Pro for free. Microsoft has just announced that Office 365 business users now have up to 25 GB of free space in the default version of SkyDrive Pro, up from the previous limit of 7 GB. In addition, the upper size limit per file has been increased to 2 GB and the default recycle bin retention time period has expanded from 30 days to 90 days. 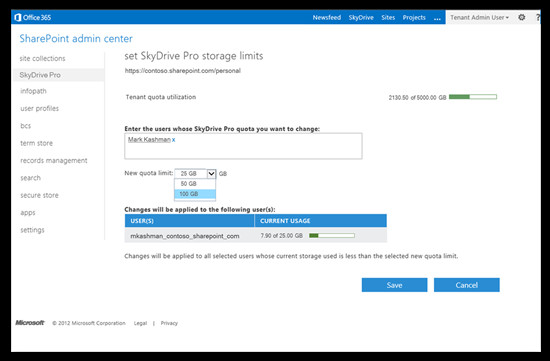 In a post on the Office 365 blog, Microsoft states that SharePoint Online admins can now increase the default cloud space for users of SkyDrive Pro from 25 GB to 50 GB and 100 GB, and those same admins can adjust the storage space for up to 25 Office 365 users at once. Microsoft also stated that "we're enabling versioning by default on newly provisioned SkyDrive Pro libraries, which saves the last ten versions, so you never lose an important document."

We did ask Microsoft if they were also planning to increase the free default storage space for SkyDrive's consumer users, but we were told by a spokesperson via email that this change is just for SkyDrive Pro users. In other words, everyone else will still have to stick with the current free default of 7 GB.

Finally, SkyDrive Pro has a new feature called Shared with Me, which is supposed to allow people to quickly find any files or folders that have been shared by others, even if they reside in another person's SkyDrive Pro account.