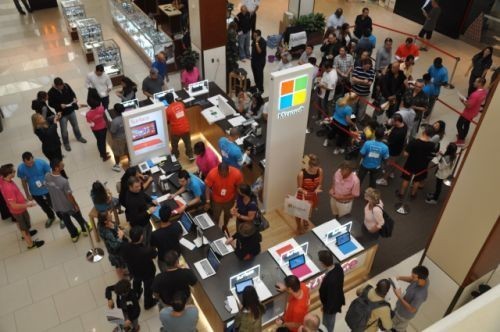 Microsoft shows no sign of slowing down its highly aggressive plans to open up many more of its smaller specialty retail stores in the U.S. The company launched five of these store fronts in April and another store in May, and this month it is scheduled to open three more locations.

Today, a new check of the company's hiring webpage shows that Microsoft is looking for people to work in three unannounced new specialty retail stores. Specifically, the locations are in McAllen, Texas; Boca Raton, Florida; and Wauwatosa ,Wisconsin; The Wauwatosa store will be the first Microsoft Store to open in the state of Wisconsin.

As we have mentioned before, Microsoft first started opening these smaller specialty store fronts in the fall of 2012. Many of them are created to be located in shopping malls as kiosks that sell a limited number of Microsoft-themed products.

Microsoft currently has 70 combined full and specialty retail stores open in the U.S. and Canada. Besides the three specialty stores opening in June and the three more locations that Microsoft is hiring managers for, the company will open several more full retail stores in June, starting with Saint Louis, Missouri, on Friday at the Saint Louis Galleria, and on Thursday, June 13, at the Ala Moana Center in Honolulu, Hawaii.