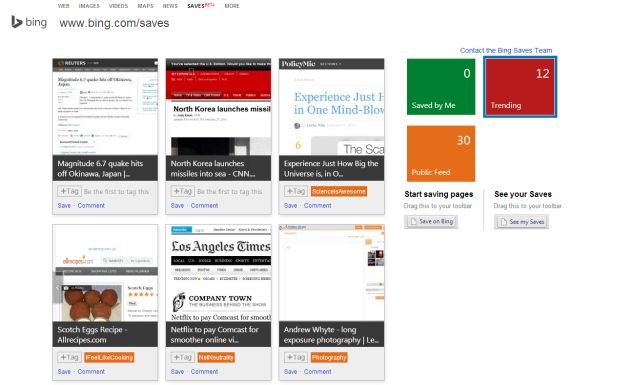 A few weeks ago, we reported that Microsoft had sent invites to a few people to test out Bing Saves, a new way to save content found while searching on the website. Now Microsoft has quietly opened up that beta test to the general public.

People who sign up to use Bing with their free Microsoft Account can now access Bing Saves, which lets people save any URLs generated in a search string to that page on the Bing site. It also has sections where people can see which URLs on Bing are currently trending, along with a "public feed" of addresses that might be of interest to the specific user.

We tested Bing Saves using IE11 as well as the latest versions of Chrome and Firefox and it seems to work as advertised on all three browsers. One difference we noticed from the closed beta test is that there is no "Liked By Me" section in the open beta.

Microsoft does state at the bottom of the Bing Saves site that it is an experiment and as such, any saved data "may not be available later" so keep that in mind when you start collecting URLs on the page.