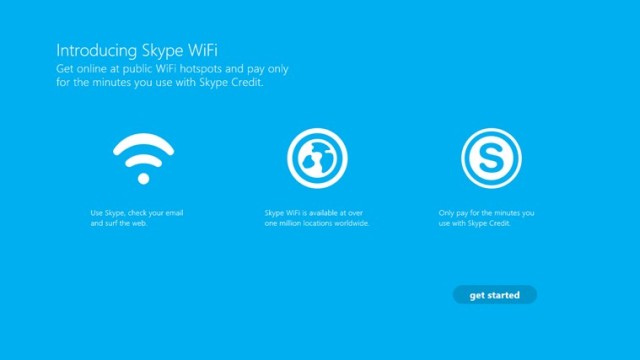 Skype not only runs its own VoIP service, it also allows its users to connect to over one million paid WiFi hotspots all over the world from a variety of venders like Boingo, AT&A and more. Now Skype, and its parent company Microsoft, have released a new app for Windows 8 users that lets people quickly find and connect to all those hotspots.

The free app, now available to download in the Windows Store, lets people use those wireless hotspots by just connecting to their Skype account and then using Skype Credit to pay for their time on the hotspot. Skype WiFi has no data limits and users only pay for the time they are connected to the hotspot.

This new app is especially good for frequent travelers who own a Windows 8 tablet or notebook but don't have access to a cellular data plan. This should allow them to connect to a ton of paid WiFi hotspots at hotels, restaurants and other locations and access them with just their Skype Credit, without having to put in their credit card.

This is just the latest Windows 8 app that Microsoft has released in the past few weeks. It recently launched a Network Speed Test app, three Microsoft Dynamics ZX apps, and a SharePoint NewsFeed app.