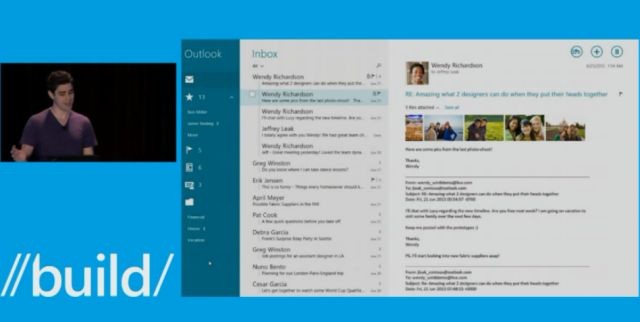 The session, which is available to view now on the Channel 9 website, was conducted by Jeremy Epling, the Principle Program Manager Lead on the Mail app. He stated that for the Windows 8.1 update, the goal is to make the Mail app more useful for people who use the keyboard and mouse controllers, compared with the emphasis on touchscreen PCs in earlier versions.

As you can see in the image above, the Mail app for Windows 8.1 now has a new column on the left side of the app which is called the Power Pane. It will automatically label emails in a user's inbox in different categories, such as Favorites. If the app is connected to Outlook.com, emails that have News Updates and Social Networks will automatically be taken out of the inbox and filter them into the categories in the Power Pane. Another feature will allow the multiple app view mode in Windows 8.1 to allow users to write or view multiple emails at the same time.

Microsoft will also update the Calendar and People apps in Windows 8.1 alongside the Mail app, according to Epling, but no details were revealed. As we reported last week, the Messaging app that's included in Windows 8 will be removed in Windows 8.1 in favor or Skype.