The European Commission said today that it had accepted Microsoft's commitments to give users browser choice.

Under the terms of the agreement, Microsoft will need to supply a ballot screen for users to choose their preferred browser. OEMs will also be able to ship new PCs in Europe without Internet Explorer pre-installed. If Microsoft fails to commit to the agreement within the next five years then EC regulators will impose a fine of up to 10% of Microsoft's total annual turnover without having to prove any violation of EU antitrust rules.

In a statement issued today, Competition Commissioner Neelie Kroes said: "Millions of European consumers will benefit from this decision by having a free choice about which web browser they use. Such choice will not only serve to improve people's experience of the internet now but also act as an incentive for web browser companies to innovate and offer people better browsers in the future."

The BBC notes, the browser dispute has lasted 10 years and resulted in the EU imposed fines totalling 1.68bn euros ($2.44bn, Â£1.5bn). Microsoft recently proposed a randomized ballot for users to select their browser of choice after Windows is installed. The EU is happy with this change, stating "the approved commitments address these concerns. PC users, by means of the Choice Screen, will have an effective and unbiased choice between Internet Explorer and competing web browsers. This should ensure competition on the merits and allow consumers to benefit from technical developments and innovation both on the web browser market and on related markets, such as web-based applications."

The agreement ends years of legal tangles between the pair over browser choice in Windows. In 2004 the EU forced Microsoft to remove Windows Media Player from its Windows operating system. Microsoft was originally planning to release a browser-less version of Windows 7 (E Edition) but scrapped its plans at the last minute after the EU approved of the browser ballot screen.

Brad Smith, Senior Vice President and General Counsel for Microsoft said "We are pleased with today's decision by the European Commission, which approves a final resolution of several longstanding competition law issues in Europe. We look forward to building on the dialogue and trust that has been established between Microsoft and the Commission and to extending our industry leadership on interoperability."

Opera, a vocal opponent of Microsoft bundling Internet Explorer into Windows, also issued a statement regarding the announcement this morning. "This is a victory for the future of the Web. This decision is also a celebration of open Web standards, as these shared guidelines are the necessary ingredients for innovation on the Web," said Jon von Tetzchner, CEO, Opera Software. 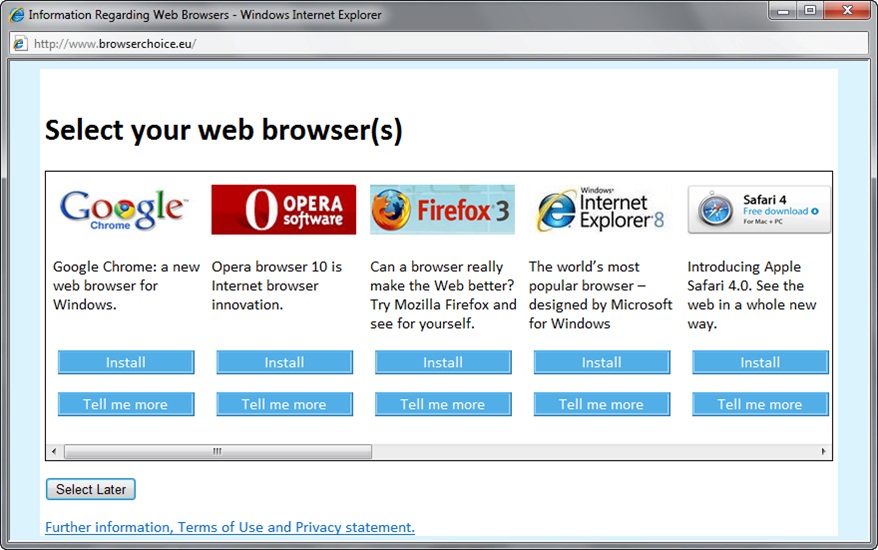