Earlier this year, Microsoft released a new version of its in-house YouTube app for Windows Phone 8. However, the app did not support ads from Google's video service and as a result, Google sent Microsoft a cease and desist letter, demanding that the downloads for the app be stopped. Microsoft later said it would comply if it got full access to Google's APIs for YouTube.

The dispute between the two companies reached a truce in May when they sent out a joint statement saying they would work together to develop an official YouTube Windows Phone app. Today, Microsoft relaunched its new YouTube app, this time supporting both Windows Phone 7.5 and Windows Phone 8. 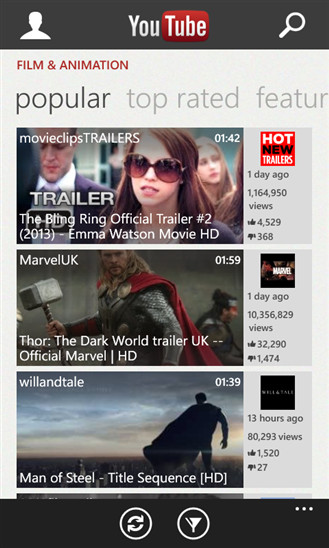 The listing on the Windows Phone Store makes it clear that the app was made by Microsoft and is "not associated with or sponsored by YouTube, LLC or Google, Inc." However, in a statement to Neowin, Microsoft said there was at least some collaboration with Google on the app. The statement said:

We’ve released an updated YouTube app for Windows Phone that provides the great experience our consumers expect while addressing the concerns Google expressed in May, including the addition of ads. We appreciate Google’s support in ensuring that Windows Phones customers have a quality YouTube experience and look forward to continuing the collaboration.

In terms of features, the YouTube app allows users to pin videos, channels, playlists and more to their Windows Phone Start screen as Live Tiles. YouTube users can also sign into their profile and manage their own playlists. The app allows users to upload videos to their channels but does not allow for downloading videos.

Videos from YouTube can be shared via email, text messages and social networks via the new app, and kids who use their parents' phone can view age appropriate YouTube videos in the Kid's Corner section.