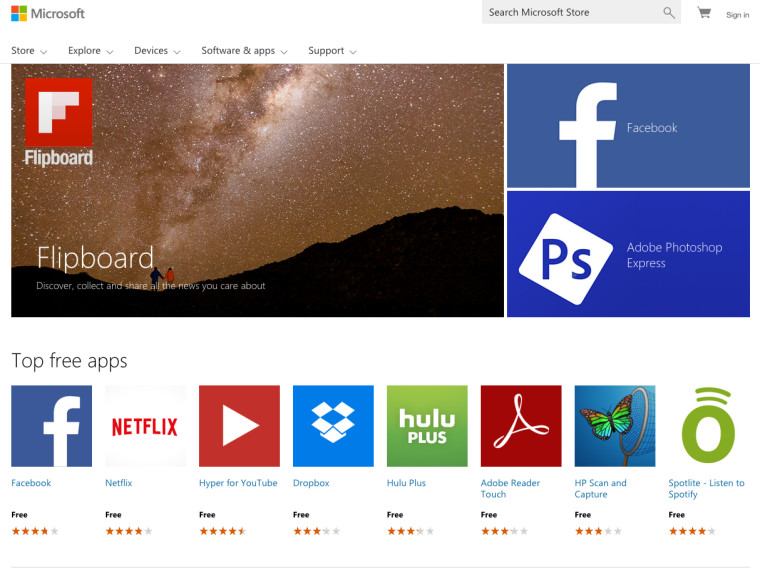 One of the big features that is coming with Windows 10 are universal apps; these are apps that can run on any of Microsoft's platforms and the company is hoping that this feature will attract and retain more developers. Ahead of the release of Windows 10, it looks like Microsoft is revamping its online storefront to showcase apps.

The app storefront is more than meets the eye. While it looks like every other app storefront on the web, for Microsoft, this appears to be the start of the unified app store push. Right now, you can easily search Windows apps and using the 'Get' button, it will open up the Windows Store beta app (in Windows 10) and allow you to download the application.

It gets a bit more interesting if you look at the navigation of the site as well because under 'apps', Microsoft is now listing Xbox applications too. This is important as this could be the beginning of creating one, universal, app store web-front. There is still a long way to go to fully complete this process but this could be the start of that movement and the timing is right for an expected release later this year.

Another issue that becomes apparent with the app store is how many crap apps people are buying. If you look at the 'top paid' apps, four of the top twelve are for file extractors. Also, the 'Top Paid' and 'Top-grossing apps' are the exact same.

You can check out the new site here and let us know what you think of the new layout and look of the site.