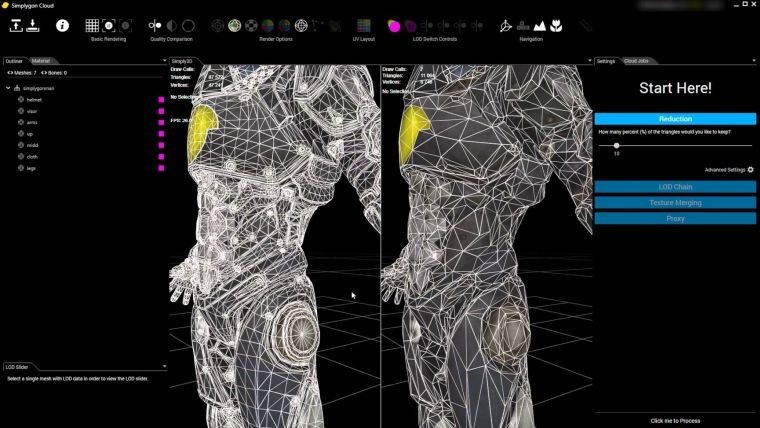 We haven't heard much about Simplygon since Microsoft acquired it in January, but today Microsoft announced it is rolling out a new virtual machine service for mixed reality development to optimize 3D content.

Entitled Simplygon Cloud, the service will remove the manual effort of asset optimization. "With Simplygon, you can create 3D assets once – at full visual fidelity – and automatically optimize them to render smoothly on any platform – within minutes, saving valuable time and money," Lorraine Bardeen, general manager of Windows Mixed Reality Experiences, said in a blog post.

The service, now available through the Azure Marketplace, supports GLTF, FBX, and OBJ file types, along with Unity 3D and Unreal Engine rendering engines. It also supports all major mixed reality platforms, including Windows Mixed Reality, ARKit for iOS, and ARCore for Android.

In a visual explanation using the above image, Bardeen said:

As an example, the above left 3D model of a couch was built with 584,000 polygons. To render this content on a lower GPU device, Simplygon optimized this down to 5,000 polygons, which greatly reduces the file size, while maintaining the ideal visual fidelity for the intended device.

If you are interested in grabbing Simplygon Cloud for development, Microsoft has complete documentation and a how-to on getting started.