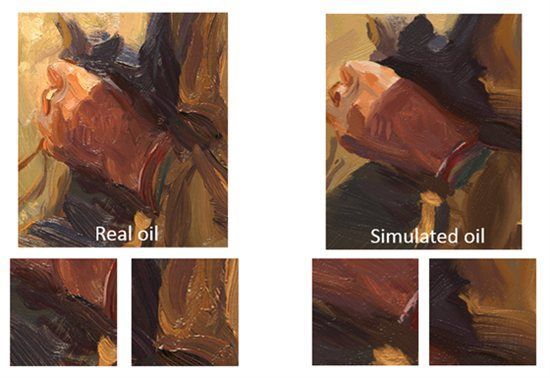 Of all the apps that Microsoft has created specifically for Windows 8, the one that has received the most attention has been Fresh Paint. The art creation tool, which uses the touch screen features of the new OS, is even the subject of a Windows 8 TV ad.

The Next at Microsoft blog has now gone into detail on how Fresh Paint was created. It started life at Microsoft Research with a program that got the code name "Project Gustav". The goal was to simulate oil painting with a digital method. The blog added:

But the team wanted to go beyond that to explore how to simulate oil on canvas and how that oil interacted with tools such as a paintbrush. The team built a prototype that critically treated oil as “wet” so that when it was dynamically mixed, a physics model would precisely replicate on the screen what would happen in the real world when you combine oil, a surface and a tool. With that prototype built, the team invited kids from their own families in to the office for what they called “Art Jams” and observed how these creative minds were unleashed on their prototype.

The research team then approached the The Museum of Modern Art in New York City, where they both agreed to set up a prototype app in the museum. The prototype was used by over 60,000 people who visited the museum in a year. Microsoft learned a lot from those visitors. The blog states:

As more and more people played with the app, the team heard that they wanted to be able to do things like paint on top of paint, say put a sun in the sky they just brushed on their canvas. Ira and team listened and created the app’s “dry” button, bringing smiles along with the spinning fan. The experience and the feedback was not only a testament to the capability even within the prototype—it was the encouragement that was needed to take things further.

Nine specially selected families were also able to try out the prototype with a touch screen PC which led Microsoft to make further improvements to the program. The final version of the app, Fresh Paint, is now available for free to download in the Windows Store for Windows 8 PCs and is ofted pre-loaded on new PCs with the OS.

Source: Next at Microsoft blog | Image via Microsoft