Earlier this month, Microsoft unveiled the Surface Laptop Go. You're probably already familiar with the Surface Go, which is now on its second generation, and the Laptop Go aims to achieve the same goal. The key is in the word 'Go'. They're both smaller, lighter products that you can call super-portable.

But they do it in different ways. With the Surface Go, it uses an underpowered Pentium Gold processor, delivering value in other areas like a slim and light tablet form factor that's otherwise completely unavailable at its price point. The Surface Laptop Go, on the other hand, actually has a full Core i5-1035G1 processor, so you're really not compromising.

The Laptop Go also takes the best of the Surface Laptop 3, shrinks it down, and puts it into a more inexpensive package that starts at $549. Yet most of it is still aluminum, it comes in pretty colors, and it has the same ports.

As always, the above specs are for the configuration that Microsoft sent me. It's worth noting that the base model has 4GB RAM and 64GB of storage, but that's actually eMMC storage. There's also a mid-tier model for $699.99 with 8GB RAM and a 128GB SSD. 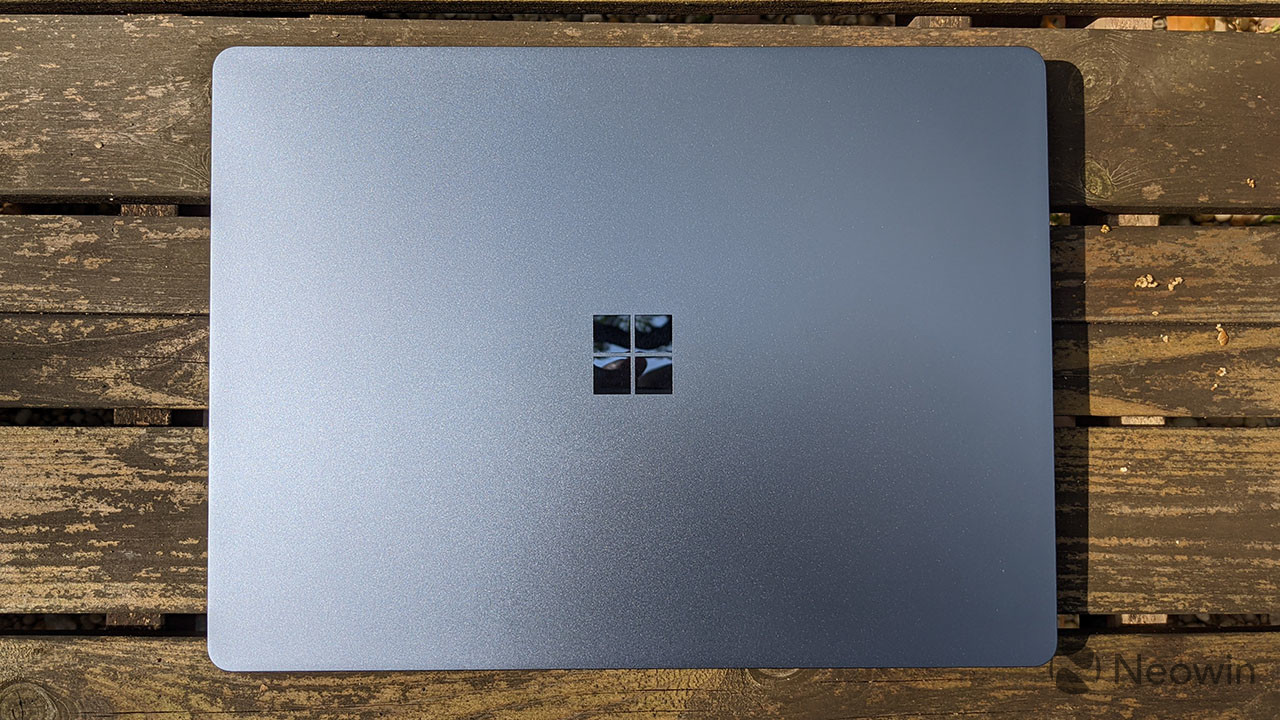 The model that Microsoft sent me is Ice Blue, which is a color that's actually debuting with this device. Sandstone debuted with the Surface Laptop 3. The lid and the keyboard deck are both made out of aluminum, just like any other Surface Laptop. The bottom, however, is made out of polycarbonate, and I absolutely love it. 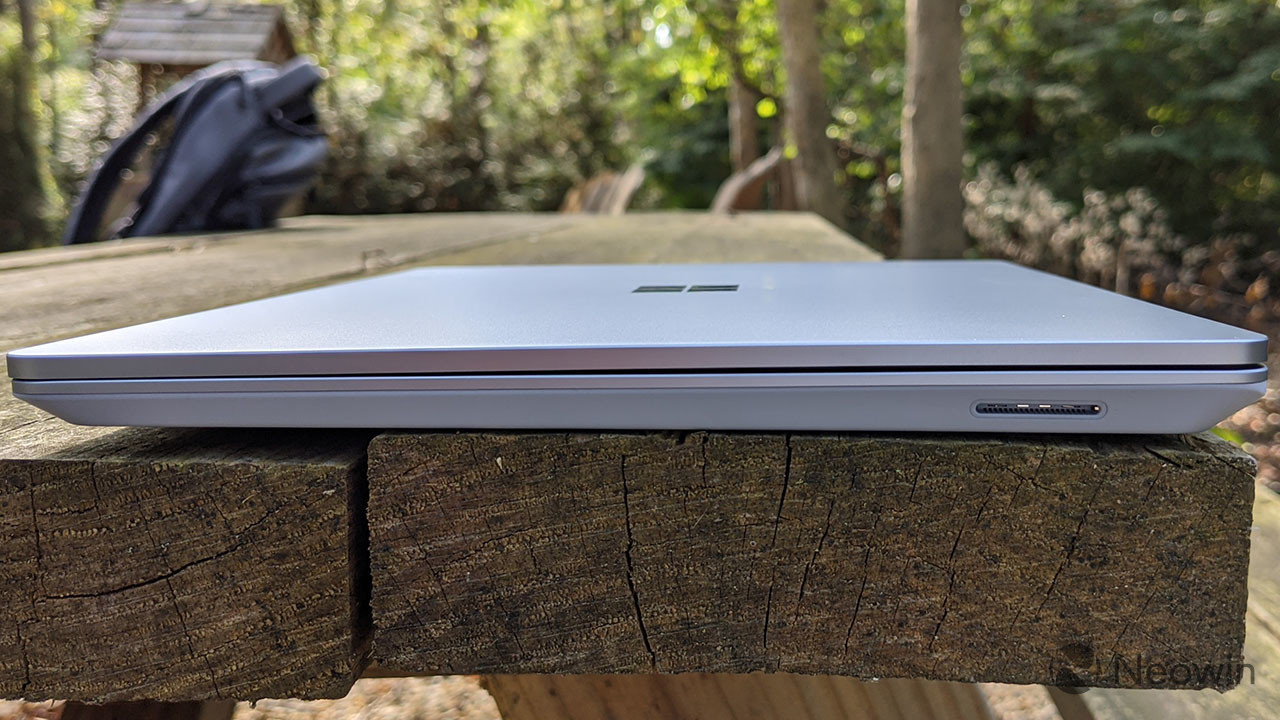 This isn't the first laptop that I've reviewed this year with an aluminum lid and a polycarbonate base; Lenovo did it with the Flex 5. It provides a sort of two-tone design, a nice touch when using an already subtle color like Ice Blue. I also like the feel of polycarbonate and its matte texture.

On the right side of the device, there's just a Surface Connect port, which is USB 3.2 Gen 2 as usual, or I should say, since it was upgraded from USB 3.2 Gen 1 with the last generation of Surfaces. 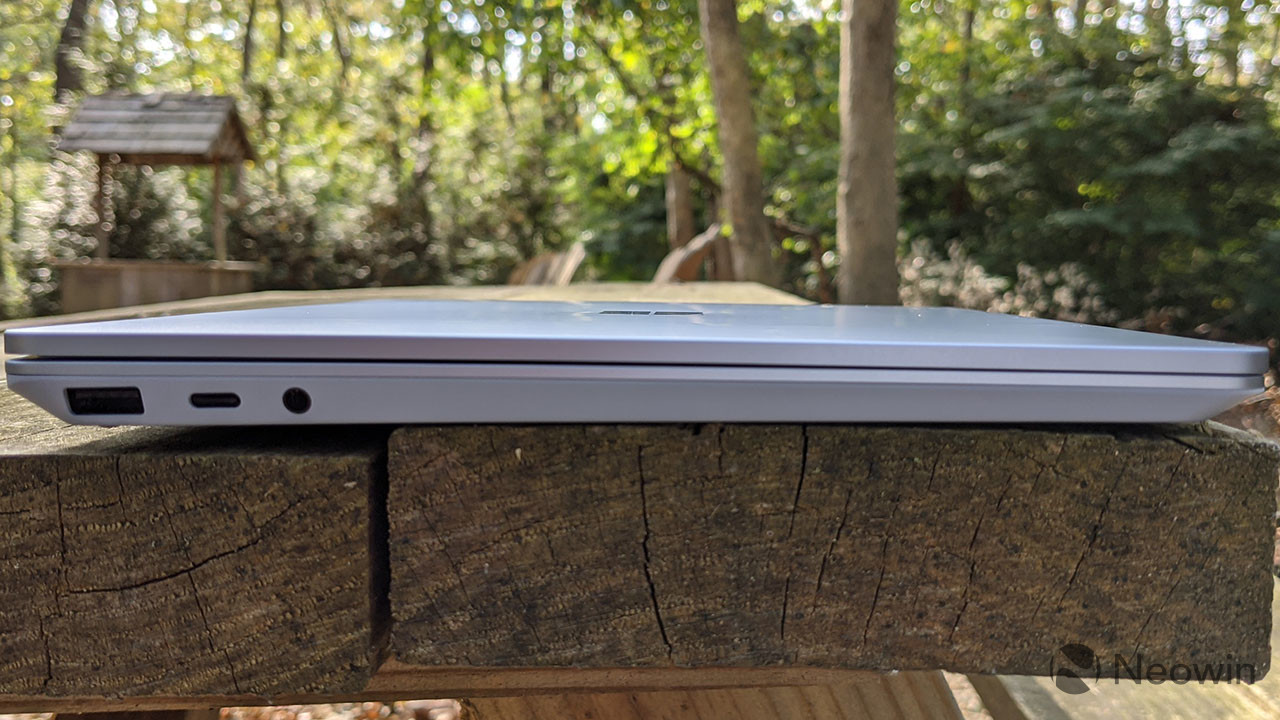 On the left side, there's a single USB 3.2 Gen 2 Type-A port and a single USB 3.2 Gen 2 Type-C port, along with a 3.5mm audio jack. One thing that I appreciate about Microsoft Surface products is that all USB ports are equal, and it doesn't set the Surface Connect port to a higher standard than the regular USB Type-C port. Unfortunately, this also means that there's no Thunderbolt 3; however, let's save that battle for the flagship Surface Laptop 3. 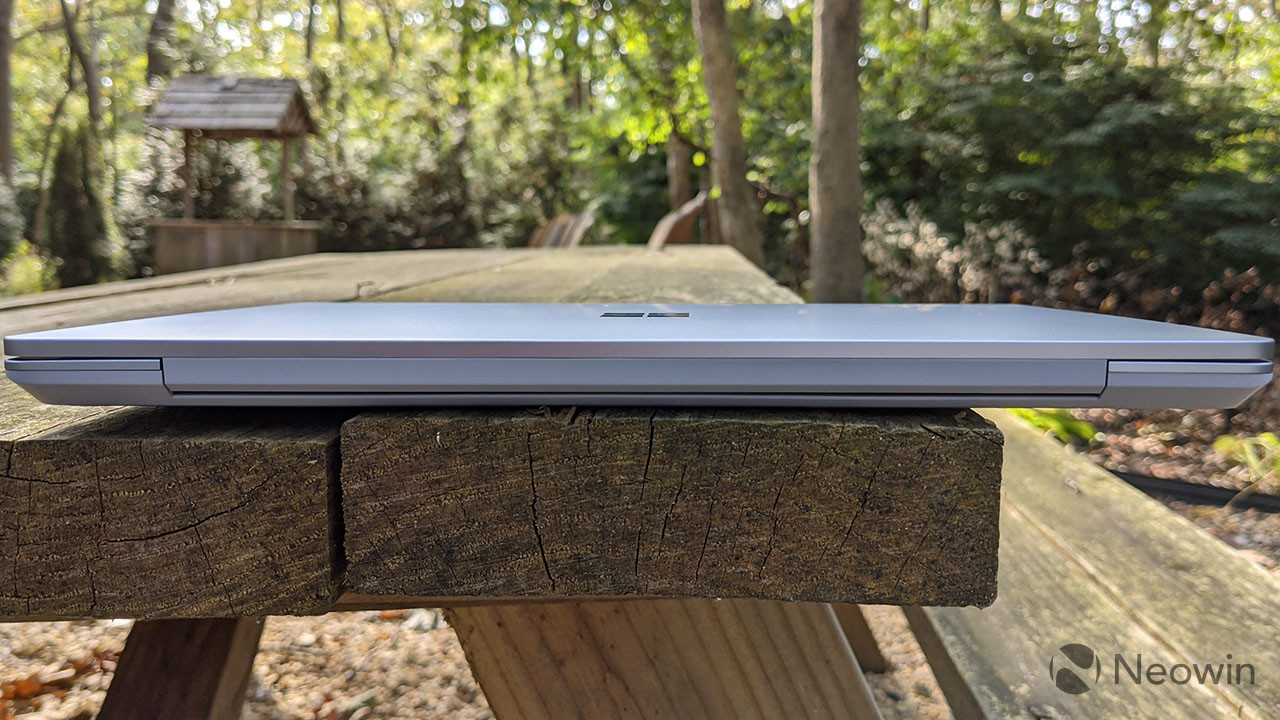 But most importantly, this thing is small and it's light, coming in at 2.45 pounds. It's perfect for taking on the go, and generally carrying around. This also became my favorite couch PC, meaning the one I'll bring to the couch in the evening if I have to grab a laptop and do some work. It's comfortable to grab with one hand to show someone else some content, or to throw in a bag without weighing you down.

The bad news is that there's no cellular option, like we do have on the regular Surface Go. The word 'Go' should imply that I want to take it on the go, and the form factor is perfect for that. But for a device that's meant to be used while out and about, it should be able to seamlessly connect to the internet without having to worry about the insecurity of public Wi-Fi, giving up my email address to a mailing list to connect, or hunting down a Wi-Fi password.

The Surface Laptop Go has a 12.45-inch 1536x1024 touchscreen, and unlike its larger siblings, it does not have pen support. Of course, pen support really isn't necessary on a clamshell device like this, and I have to assume that very few people use a pen with any version of the Laptop. 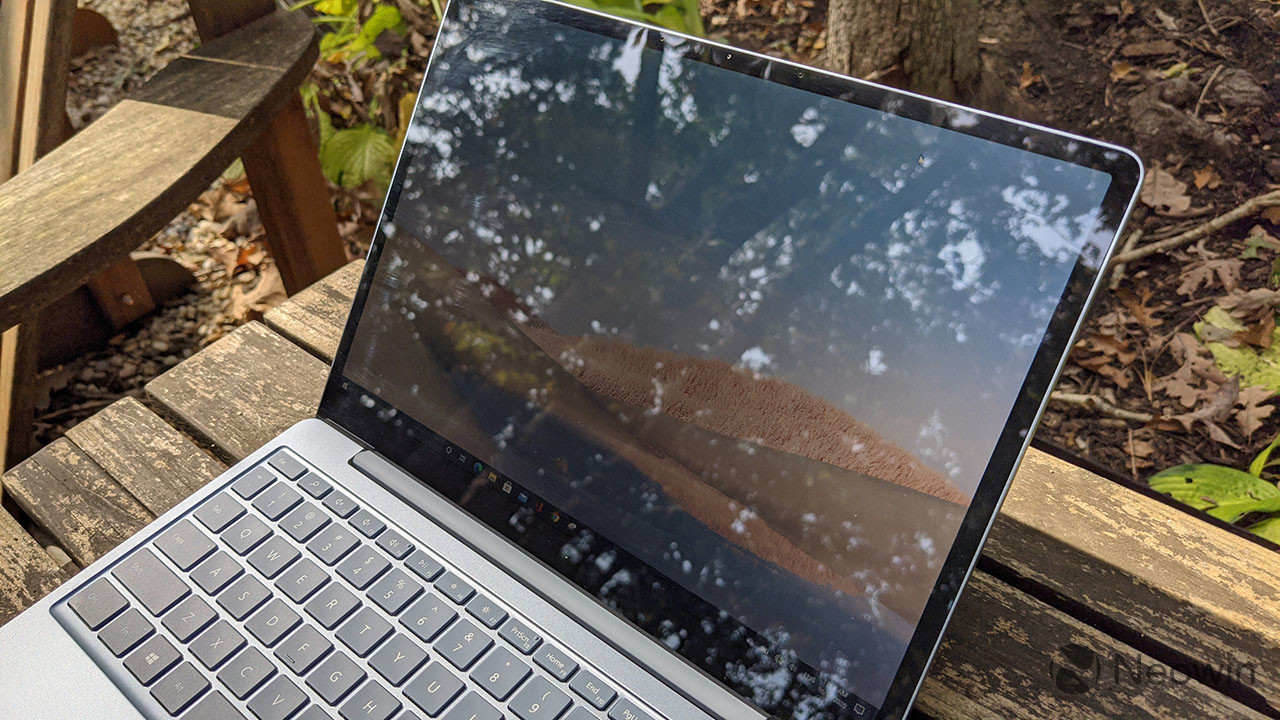 The screen is probably one of the biggest drawbacks to the device though. As always, Microsoft nails things like color accuracy, but keep in mind that the resolution is lower than FHD by around half a million pixels. The pixel density is 148ppi, tying the Surface RT for the lowest pixel density of any Surface device. This doesn't mean that the display is necessarily bad, of course, but it's something to be aware of. 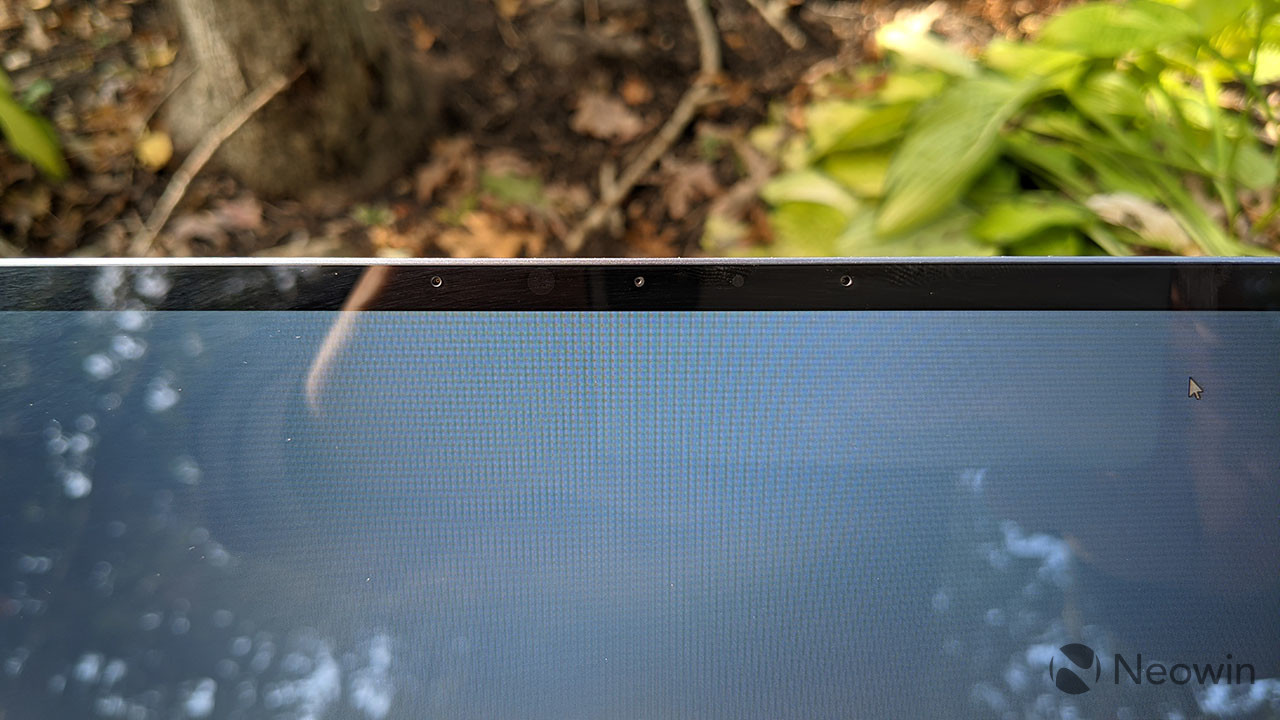 Also, for the first time since Windows Hello was introduced with Windows 10, there's no IR camera. Instead, this has been replaced with a one-touch fingerprint sensor in the keyboard. It's actually not a cost-cutting measure though, as the $549 base model doesn't even have the fingerprint sensor. Microsoft told me that it's more about fitting the IR camera in the top bezel, and indeed, this does have the smallest top bezel of any Surface PC.

The Dolby Audio speakers sound fantastic with incredible clarity. As you'd probably expect though, they don't exactly get super-loud. That's just going to be the nature of a device like this one.

Microsoft promises a full-size keyboard for the Surface Laptop Go, and interestingly enough, it delivers. I expected to have some issues with typing articles on this machine, but I didn't. Note that I had the opposite experience with the Surface Go. I think that the quality of this keyboard is actually what makes this usable for me. When it came to the Surface Go tablet, I came to the conclusion that I simply couldn't use it for work. 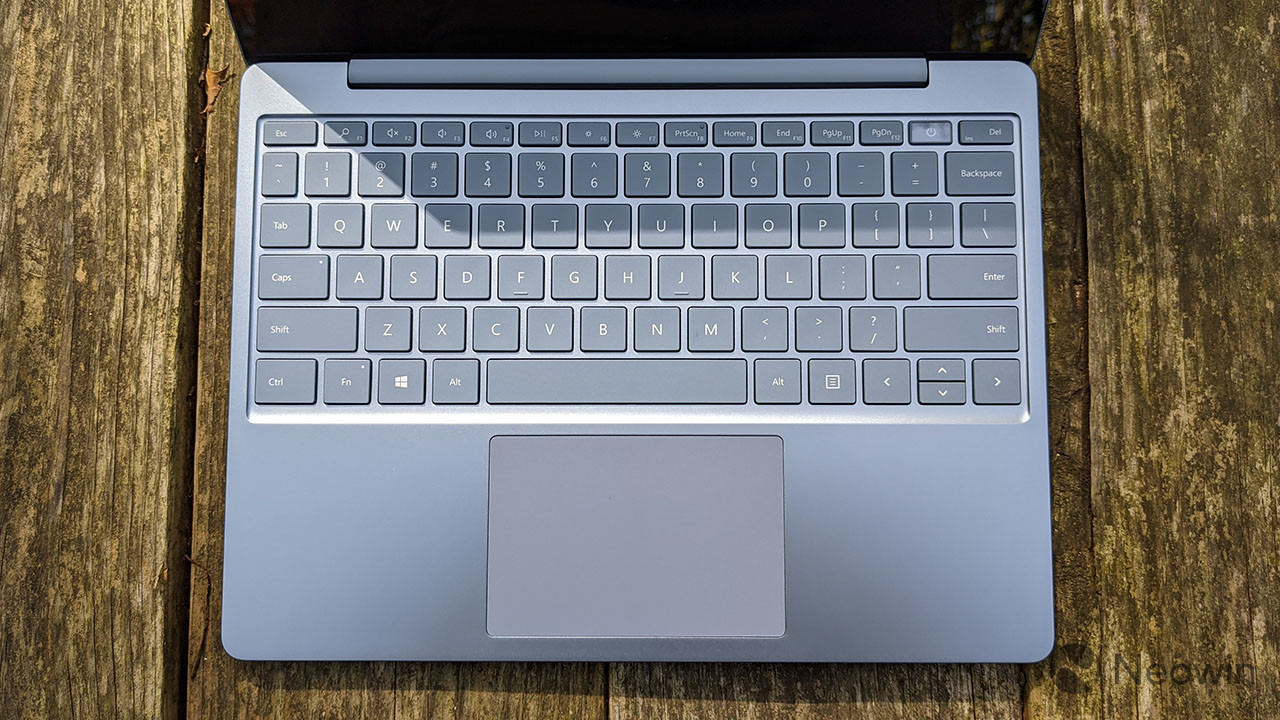 The keyboard is pretty much the same as a regular Surface Laptop, in terms of comfort and accuracy. One thing that's different is that the keyboard is not backlit. This move is surely about cost-cutting, as there really isn't any other reason to leave out a feature like that. 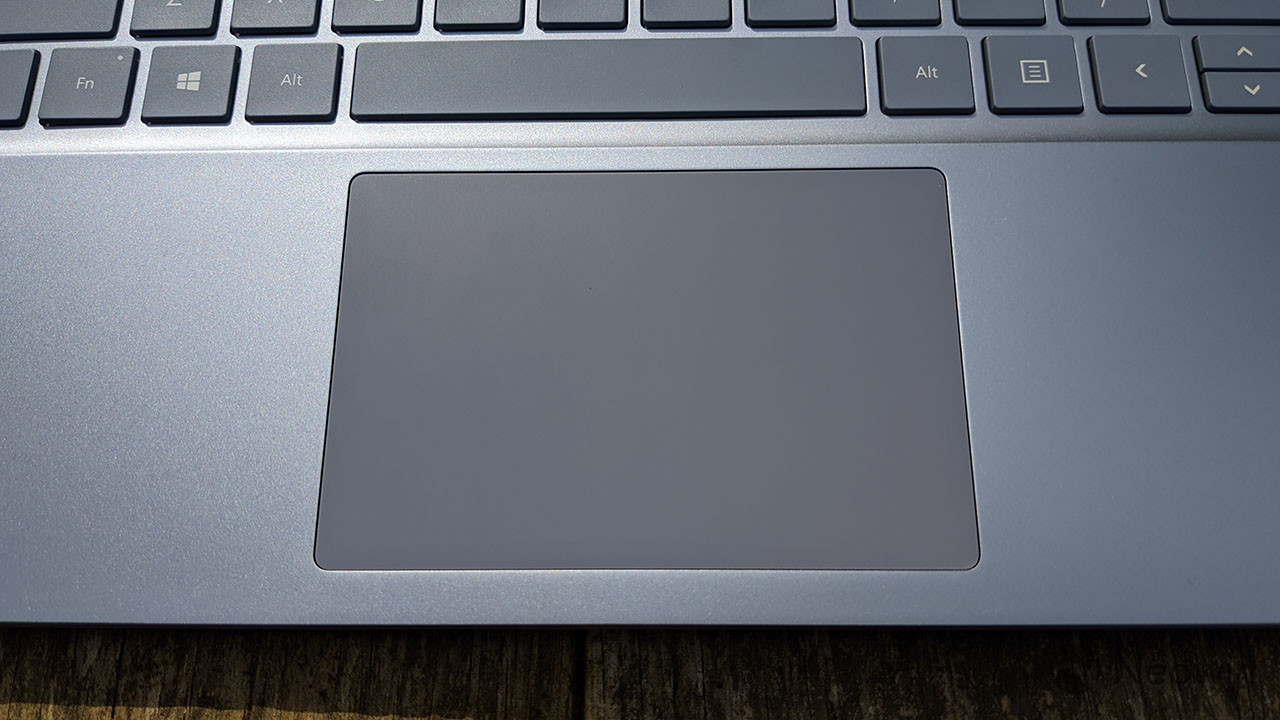 Just like the premium typing experience, there's a premium trackpad experience. It's a glass Precision trackpad that feels smooth to the touch, and it's comfortable. Moreover, it's a lot quieter than the one I criticized on the 15-inch Surface Laptop 3. Seriously, the Laptop 3's trackpad was so loud that it was almost embarrassing to use in a quiet room. That's not the case here. 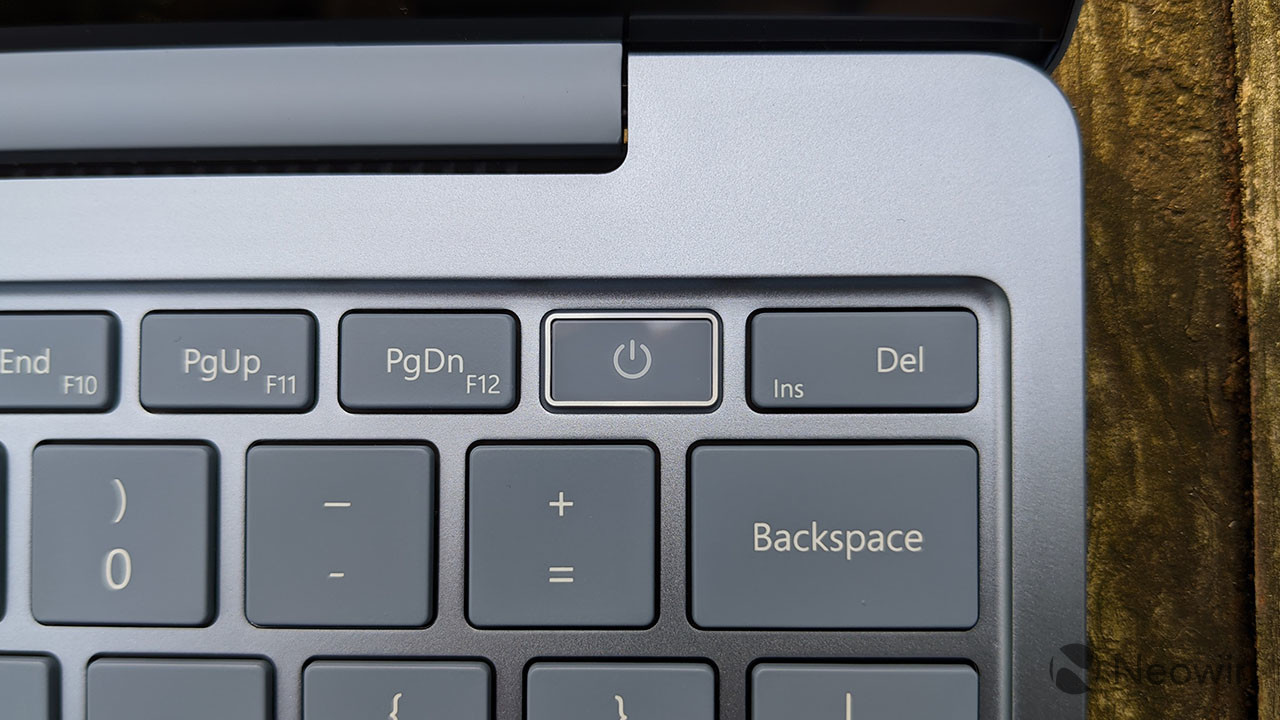 While there's no backlight on the keyboard, there is one light, which borders the power button indicating that that's the place to touch when it's time to log in. It's a one-touch fingerprint sensor though, meaning that it scans your fingerprint the first time you press it, rather than after the machine boots up.

It's important that you think of the Surface Laptop Go as a productivity device that can be used on the go. It's not made for creators, and that's evident by the hardware used. As Microsoft points out, it has a full, 15W Core i5, rather than the disappointing Pentium Gold 4425Y in the Surface Go.

The number next to the 'G' indicates graphics power, so a G7 processor has the best Iris Plus Graphics that Intel has to offer. G1 has the lesser UHD Graphics. This isn't a ciriticism of Microsoft's choices; on the contrary, I applaud that an actual 15W Core i5 is being used here. It just means that you should be aware of what this is actually for. 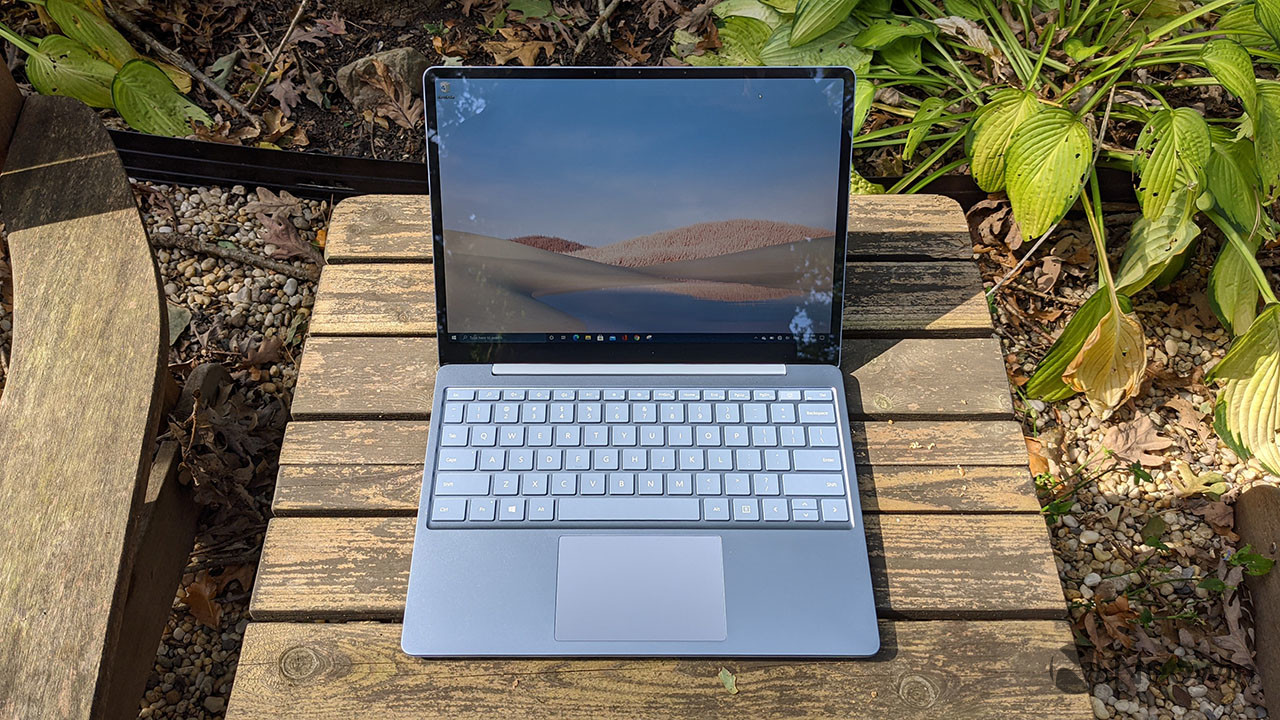 Microsoft has a Surface for everyone. The Surface Laptop 3 have powerful Iris Plus Graphics, as does the Pro 7 (although the more powerful graphics come in the i7 model for the Pro), so you can do some serious photo editing. If you want to push toward video editing and gaming, the Surface Book 3 has not only that but a dedicated GPU as well. The Surface Laptop Go is all about productivity, and it's quite excellent.

Also, the model that Micrsoft sent me has 8GB RAM and a 256GB SSD. Keep in mind that the base model has 4GB RAM, and the 64GB of storage is the slower eMMC.

Battery life wasn't quite as excellent for me. I got around six hours with the power slider at a notch above battery saver and the screen at 50% brightness. As always, this was doing regular work in the Chrome browser, OneNote, Skype, Slack, and so on.

You can see in the table above how the Surface Laptop Go stacks up against the rest of the Surface lineup. Where it really shines is in tests that don't rely on graphics power, such as the Work test in PCMark 8.

The Surface Laptop Go is a really nice little laptop, little being part of the value proposition. It's not just lightweight, but it's compact. I kind of love it. I called it my 'couch PC' earlier, and that's actually significant to me. I review PCs by using them to work. If I grab a laptop to use on the couch, that's all up to what I prefer in the moment. 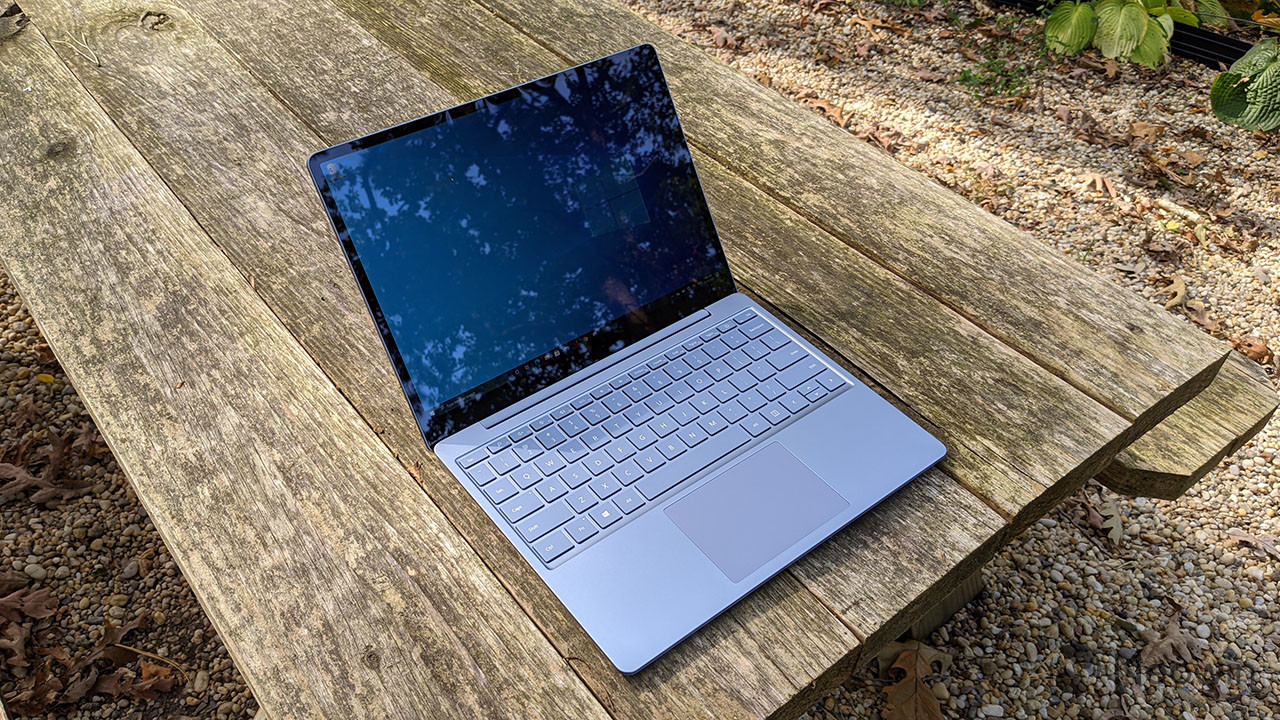 Here's the other good news: the bad news is obvious. It's got mediocre battery life, a low pixel density, no keyboard backlight, no LTE, and most importantly, no surprises. All of the cons to this laptop can be found on the spec sheet. The rest of the device is delightful.

It has this beautiful two-tone design in a sexy but subtle Ice Blue color. The aluminum lid makes it look exactly like a smaller Surface Laptop 3, and the identical ports help as well. The polycarbonate base gives it a unique look, which I actually prefer over an all-aluminum design.

It's also got a one-touch fingerprint sensor, so even though there's no IR camera, you don't have to spend extra time logging in, and of course, it has full Core i5 performance. If this 2.45-pound laptop sounds like it's for you, you can check it out here.