At the unveiling of the Surface Pro 3 in New York earlier today, Microsoft used a road sign as on obvious subtle take against rival Apple and their ideas on the future of computing. The act was staged in response to a previous gesture by Apple involving a similar analogy.

At an Apple keynote last year, CEO Tim Cook used a picture of a traffic sign featuring a tangled mess of road to highlight how he thought that "Our competition is confused." He added that they were turning tablets into computers and computers into tablets and explained how Apple 'didn't know what they would come up with next.

However, as Business Insider pointed out that at today's Surface Pro 3 announcement, Panos Panay, leader of the Microsoft Surface team, spoke in front of a plain, simple sign with just two paths leading off from it thus indicating that Microsoft isn't confused but is rather offering people two different paths to acquire the same features. 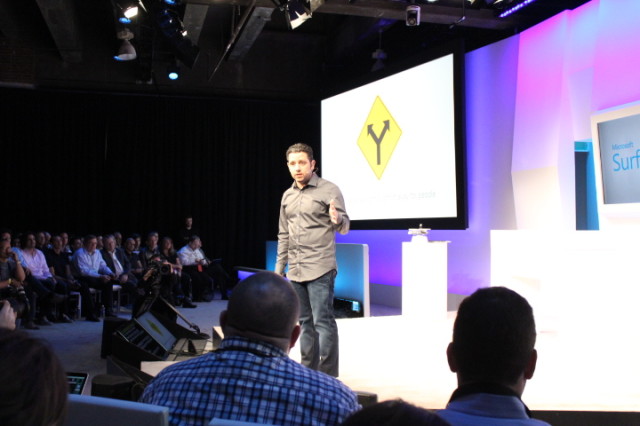 At Microsoft's Surface Pro 3 announcement today, a simple, two-way forked road-sign was used to illustrate how they have two definite development paths.

Apple has long been an advocate of the philosophy where tablets are a single-purpose device independent of computers with their own, unique operating system. Microsoft believes that all devices should have blurred lines between them, however, and thinks every product type should run the same operating system - ideally Windows 8. Apple certainly likes at least one aspect of Microsoft's operating system though as there are now multiple rumors around that a future iPad update could bring split-screen multitasking similar to the 'Snap' feature used by Microsoft since Windows 7. This would make the iPad a more viable productivity and business tool - an area where the Surface currently has the advantage.

The 12-inch, Intel-powered Surface Pro 3 unveiled today will aid Microsoft in this belief as it is designed to be marketed as a device 'to replace your laptop' despite it taking on a tablet-like appearance, even when paired with its keyboard cover.