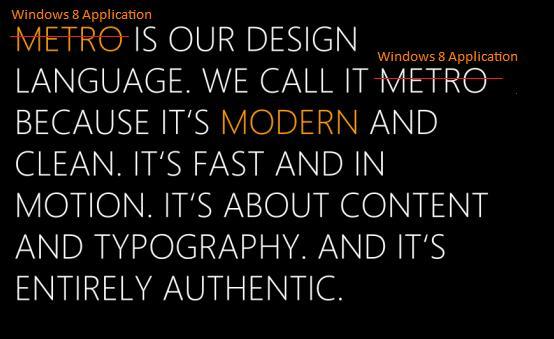 Last week it was uncovered that Microsoft would be dropping the Metro name from its products after a dispute with a European company. While the company has not officially come forward, Mary Jo Foley has gotten her hands on how Microsoft plans to refer to Metro applications and it's confusing and disappointing news out of the Microsoft camp.

Microsoft will drop the Metro application branding and will now refer what was previously known as Metro style as "Windows 8 applications". From Zdnet:

Anything currently/formerly known as a "Metro-Style application" (with or without a hyphen) will now be known officially as a "Windows 8 application." References to the "Metro user interface" will now be replaced by "Windows 8 user interface." And instead of saying "Metro design," the Softies and those adhering to their official guidelines will be using the words "Windows 8 design."

So, all of those Metro apps will now be called Windows 8 applications, the name rolls off the tongue and straight into the trash can. Microsoft lost an opportunity here to create a brand identity for its applications, essentially what Metro had done. With the field wide open for naming convention, they apparently decided on the most mundane and boring classification as possible, Windows 8 application.

While there is still time for Microsoft to do something great with the Start Screen formally known as Metro, this bit of information from trusty source is disheartening at best but we can hope that Microsoft has something better up its sleeve for down the road.