In a post today on the SharePoint blog, Microsoft said those moves will begin by allowing Office 365 users to replace their SharePoint newsfeed with the one used by the Yammer service. It added:

We'll also ship a Yammer app in the SharePoint Store so that end users can easily embed a Yammer group feed into a SharePoint site, creating a connection between groups and sites that will deliver the best of both worlds. The SharePoint newsfeed will continue to be the default social experience in Office 365, but the option to replace it with Yammer will be a valuable first step in the overall integration process. 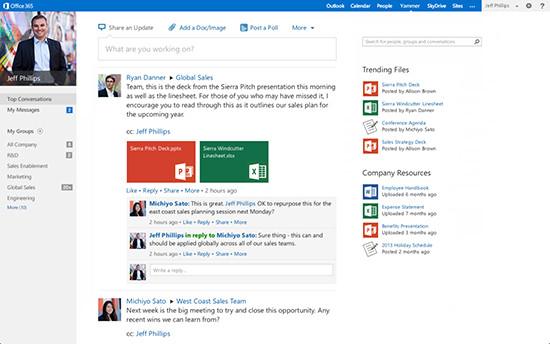 This fall, Office 365 users will see even more Yammer integration, as represented by the mock up above. Microsoft says, "This new Yammer experience will also offer rich document capabilities, integrating the Office Web Apps to add editing and co-editing of Word, PowerPoint, and Excel documents." Microsoft will add even more Yammer features into Office 365 every 90 days, going into the year 2014. It adds:

We'll start by simply deepening the connections between Yammer and Office 365 services, but over time these incremental enhancements will combine social, collaboration, email, instant messaging, voice, video, and line of business applications in innovative new ways.

While Microsoft feels that Yammer will be the best way to go forward, it also states that some businesses may never want to use such a cloud-based service. In that case, Microsoft says, "For these customers, our guidance is to use the SharePoint newsfeed.  It provides rich social features integrated with a broad set of SharePoint capabilities.  While the cloud lowers the barriers to adoption and allows for more frequent updates, we get that some customers just aren't ready to make the move."