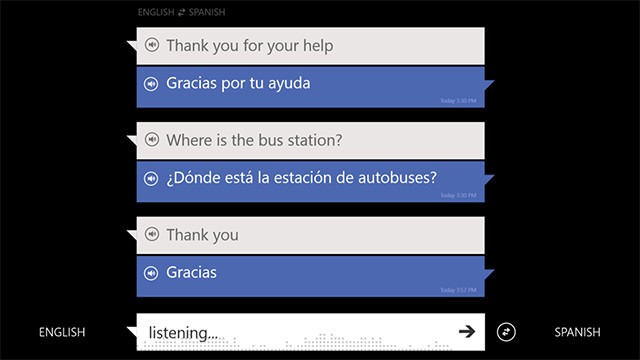 Microsoft has updated its Bing Translator app for Windows 8 to include support for speech input, putting the app on par with its Windows Phone 8 counterpart.

Now users can speak directly to their Windows devices and have text translated, with the app playing back the words, phrase and sentences in the selected language, featuring "a native speaker's accent." A blog post announcing the update also notes that camera support now exists for both landscape and portrait mode, allowing users to scan printed text from either orientation.

In addition to the updated Windows app, the Windows Phone app will be updated today with "better quality and responsiveness of translations" as well as an updated interface for selecting downloaded language packs.

Bing's translation capabilities have quickly been expanded over the years, with the service now powering integrated translation on both Twitter and Facebook. In October, Microsoft released a translator app for Office programs, allowing users to instantly translate text in documents. The Bing Translator app for Windows launched in June with support for more than 40 languages.