Note: Before we get right in to the contents of the leaked Xbox 720 roadmap we should inform everyone that the document is two years old, and references consoles like the "Wii2" which we have known as the Wii U since mid-last year. Lots of things can change in the tech world in the space of two years, but at least it gives some insight into what Microsoft was planning for the future of the Xbox back in 2010.

Anyway, the leaked document is known as "Xbox 720 9-24 Checkpoint" and details pretty much everything Microsoft was thinking of for the future of their entertainment division. It appears to be some sort of platform for invoking discussion about the Xbox 720 and other projects rather than a complete roadmap that Microsoft was going to stick to, but the information of what they were hoping to achieve is juicy.

In the document Microsoft is calling the next Xbox the "Xbox 720" and they appear to be aiming for a console that is at least six times as powerful as the current Xbox 360. The console described here will possibly have a Blu-ray optical disc drive and will be capable of delivering "true 1080p and full 3D" while launching sometime in 2013. Microsoft is aiming for a system that will launch for $299 plus a "Kinect V2" sensor, while selling more than 100 million units over a 10 year lifecycle. 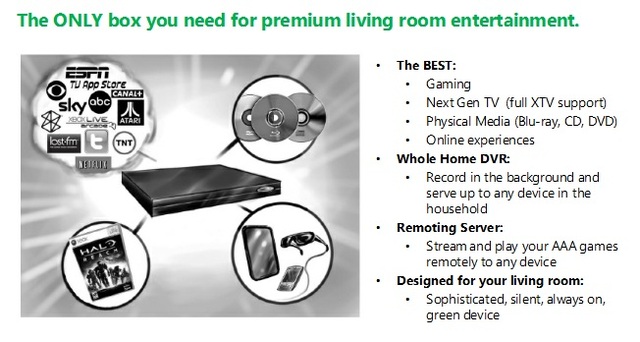 The aforementioned Kinect V2 sensor will improve (or at least they were aiming to improve) on the original by providing a better 3D play space (closer, wider and deeper), better voice recognition, better HD RGB cameras, dedicated hardware processing and support for concurrent tracking of four players.

Meanwhile in the holiday of 2012 Microsoft was looking to unleash "XTV" (aka. Xbox TV) which is a combination of "linear TV, TV apps [and] DVR" alongside internet-provided services such as Netflix. This service would be launching on the Xbox 360 first later this year before a full roll-out with the Xbox 720 in 2013; it will also work on phones and PCs.

Later in 2014, Microsoft is hoping to launch "Fortaleza", which will essentially be Kinect 3D glasses that provide a "breakthrough heads-up and hands-free" gaming experience. This will provide "seamless integration of the digital world within the physical world". Later on Microsoft hopes to bring seamless Xbox gaming anywhere on any device through the use of the cloud.

Of course, there is much more to learn from this document even though it is two years old, so we recommend you check out the source link for more.

Update: Unfortunately you can't check out the source link anymore because Microsoft has requested Scribd to take the document down; naturally they complied. This also pretty much confirms the legitimacy of the document, as some of the plans - regardless of the fact the document was from 2010 - Microsoft clearly doesn't want the public to see anymore.