A new study by mobile application store operator GetJar, says the market for smartphone applications will increase by four times its current value to $17 billion a year.  There are now a total of eight app stores available, with more in the works, an expected 38 by 2012.

Apple just passed its 3 billionth application download, one of the most popular app stores available, with more than 150,000 applications available.  iPhone users spend the most time and money on mobile applications and software for their phones, than they do on music from iTunes.

Even Google’s Android Marketplace has more than 30,000 applications already, which is continuingly to increase with great sales of the Motorola Droid.  However, sales for the Nexus One have been all but great, selling roughly 135,000 in 74 days. 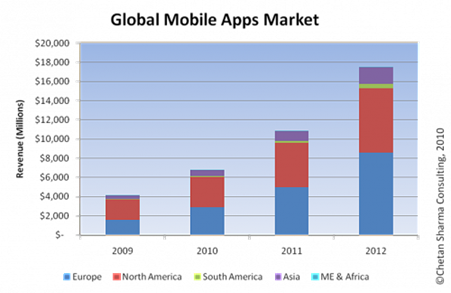