Motorola and Verizon have teamed up to release a new flagship called the Droid Turbo. While the device does not claim to be the thinnest device on the market, it does pack some impressive specs including a claimed 48-hour battery life.

While other features are top-notch, at least on paper - like the 21MP camera - for most users, the battery life will be a key spec that will attract attention. After-all, what good is the 2.7 Ghz quad-core processor if it kills your battery in only a few hours?

And right from the start, you will notice some subtle changes to how Verizon is pushing the 'Droid' brand. For starters, when you turn the device on, it no longer says "DROOOIDDD" at max volume. Anyone who has ever had an older Droid that did this, knows the embarrassing feeling of trying to turn your phone on in a public setting only to have it announce to everyone that your phone was rebooting.

But here we are, with a new Motorola flagship on Verizon that is playing in a heavily contested marketplace with iPhones, Lumias and of course the recently launched Nexus 6. With all of these devices competing for your dollar, has Motorola built a phone that stands out enough to warrant a two-year commitment to this device?

If there is one thing Motorola did, it was to check the premium boxes for high-end equipment. With a quad-core 2.7GHz Snapdragon under the 5.2-inch Quad HD (that's 2560x1440px) display, 21MP shooter out back, and 3GB of DDR3 memory, this phone is nothing short of a powerhouse.

And the best part? To keep all those chips running, there is a 3900mAh battery to make sure that you don't have to carry around a charger too. Our results were a bit less triumphant than what Motorola is promising, but we will have more on that below.

From looking at the spec sheet, the Droid Turbo is a beast. There is no question that Motorola set out to build the most powerful phone on the market and did so by putting the highest spec'd display and fastest processor that it could manage to use, and only falling short of shoving an Intel i series processor in the device. And of course, that 21MP camera will provide high-resolution shots as well.

One thing that is not included is a microSD card slot; while you can get 32GB and 64GB models, having the ability to add additional storage is always welcomed.

With a premium phone you will expect premium build quality and Motorola almost gets it right with the Turbo. While the red backing is a personal choice (black is available too) the material does not feel premium. Yes it is Kevlar, but that doesn't mean that it feels great in your hand. Motorola says it is a blend of Kevlar and metallized glass fiber, but whatever it is, it has a plastic-like feel to it. It's a personal choice as to whether or not you like this kind of material on a phone, so make sure to try it out before you buy this phone. 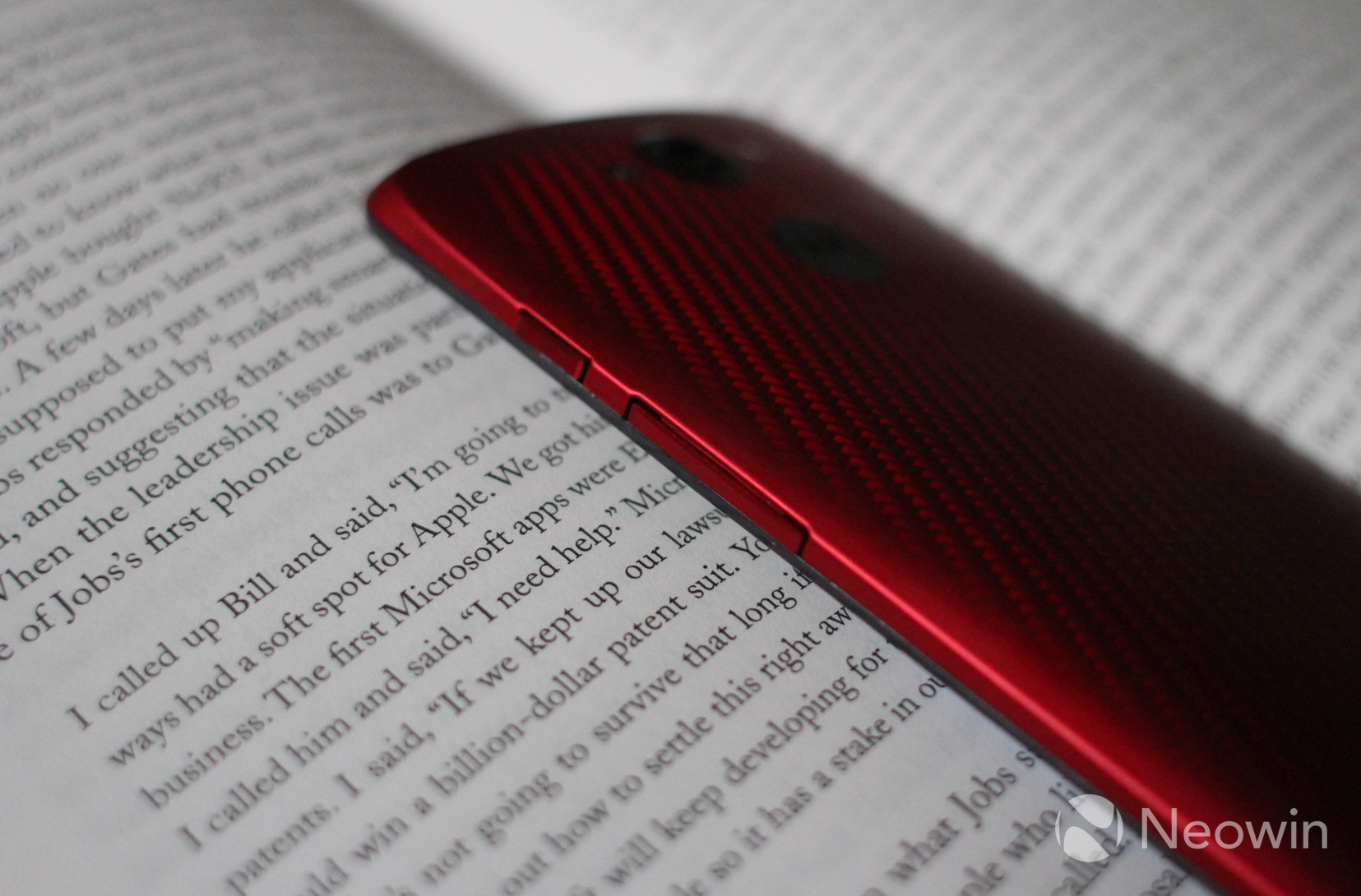 And there is an even bigger issue on the back of the phone. Near the Verizon logo on the backside of the cover, if you push on the cover with a light amount of pressure, it appears to stick to the back of the battery (or whatever is behind that part of the panel) it makes an audible 'pop' when it unsticks. It's quite annoying once you discover it, and something that should have been addressed before production.

Aside from the back panel, the phone is well made and the buttons have the right amount of engagement to give you satisfaction that the action was performed. There are three buttons on this phone: volume up/down and a power button.

After reading the spec sheet, if you are not impressed by the resolution, your standards may be too high. Coming in at 2560x1440px with a massive pixel density of 565ppi, you can't see any pixels at all. Even putting your eyeball right up to the glass, the pixels are hidden and the display is impressive.

But, with that high resolution, AMOLED has some shortcomings as well; the display is not very bright. More so, off-angle viewing is good, but not the best that we have seen in a smartphone. Outdoor viewing, because of the lower light output, leaves room for improvement. 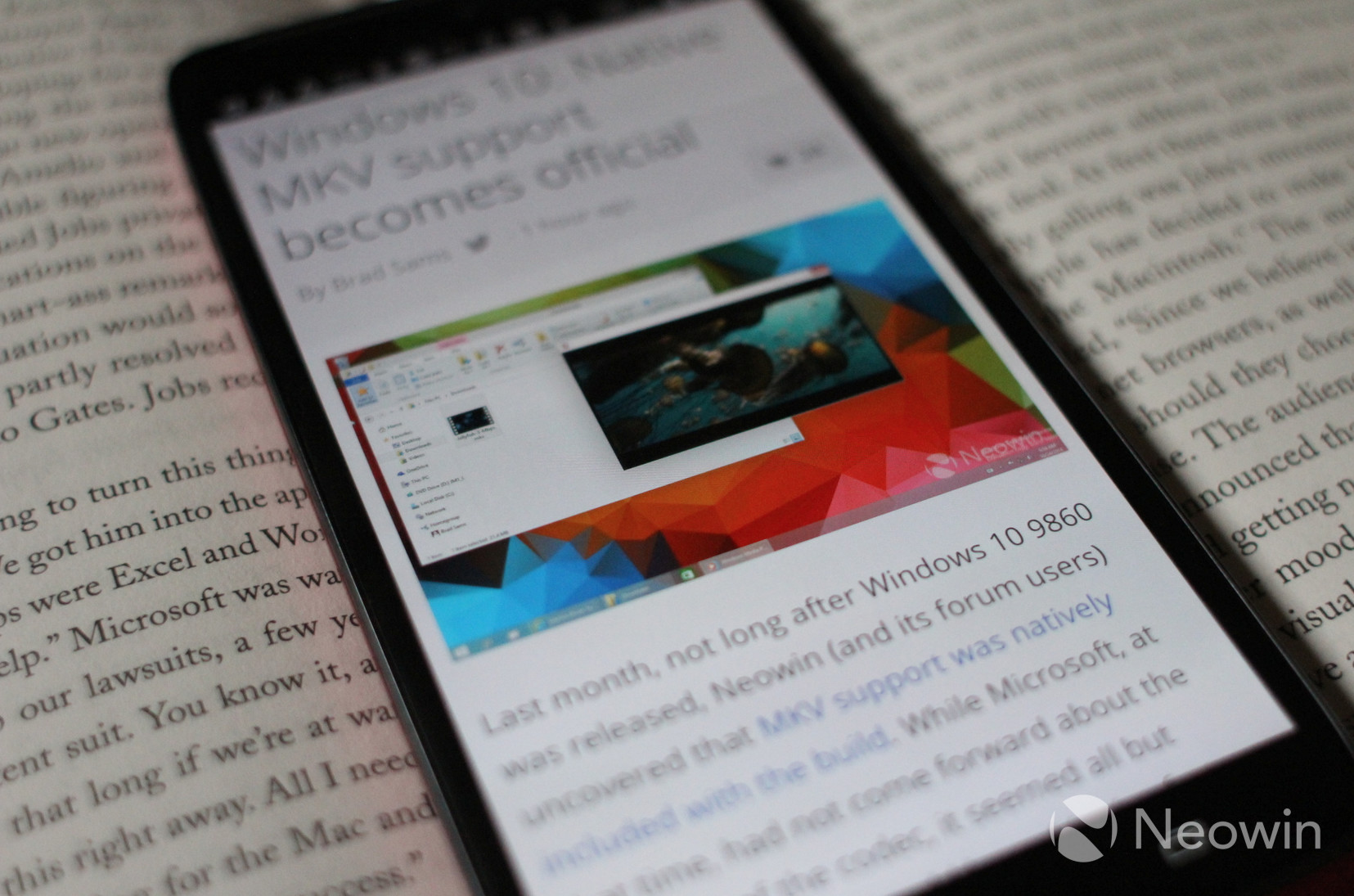 Colors appear to be over-saturated as well with reds, in particular, looking overbearing in some images. But our display does not exhibit any cool or warm tendancies; it appears to find a good balance of being neutral in the hues.

Besides the shortcomings, most users will not care about anything other than the high resolution as the other items are small speed bumps for usability. For photo enthusiasts, the display does provide a false representation of the images you are capturing that will likely perturb your reality if you decide to print any of the pictures out.

Motorola gets it - users don't want the OEM overlays that HTC and Samsung love to use. With the Droid Turbo, you get a mostly stock Android experience and that is welcomed by nearly everyone. The device does ship with Android 4.4.4 KitKat but the company says that they will be pushing out Lollipop very quickly. While we don't know the exact time frame, seeing as there is minimal customization, you shouldn't have to wait too long.

If you have used the Moto X, the software appears to be the same. As for additional software, Motorola does toss in their Moto Display, Moto Actions, Moto Voice and Moto Assist. And this is the proper way to customize an Android device, in our opinion: to include apps that enhance the experience rather than simply changing the icons for no apparent reason like other OEMs will do. 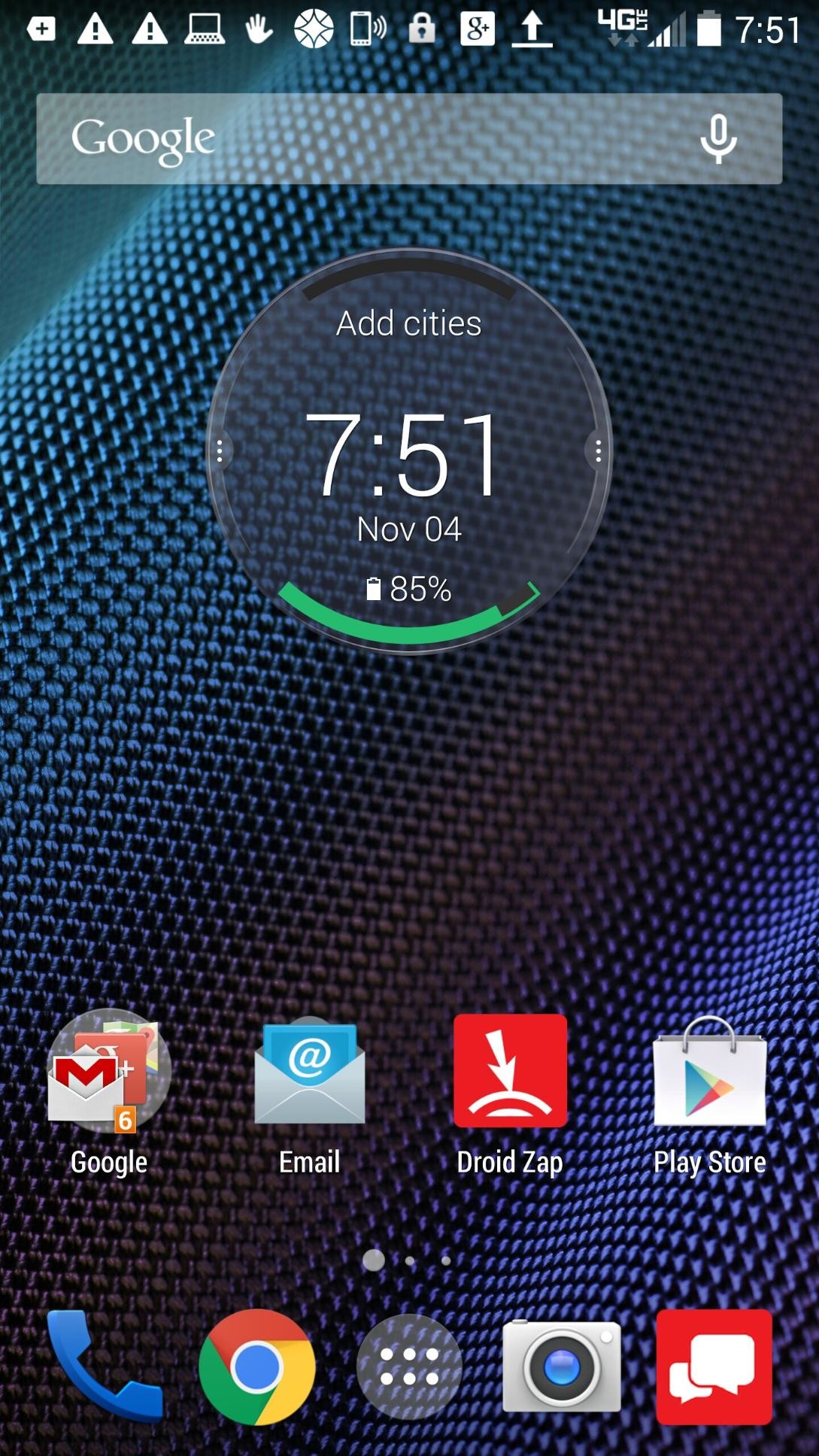 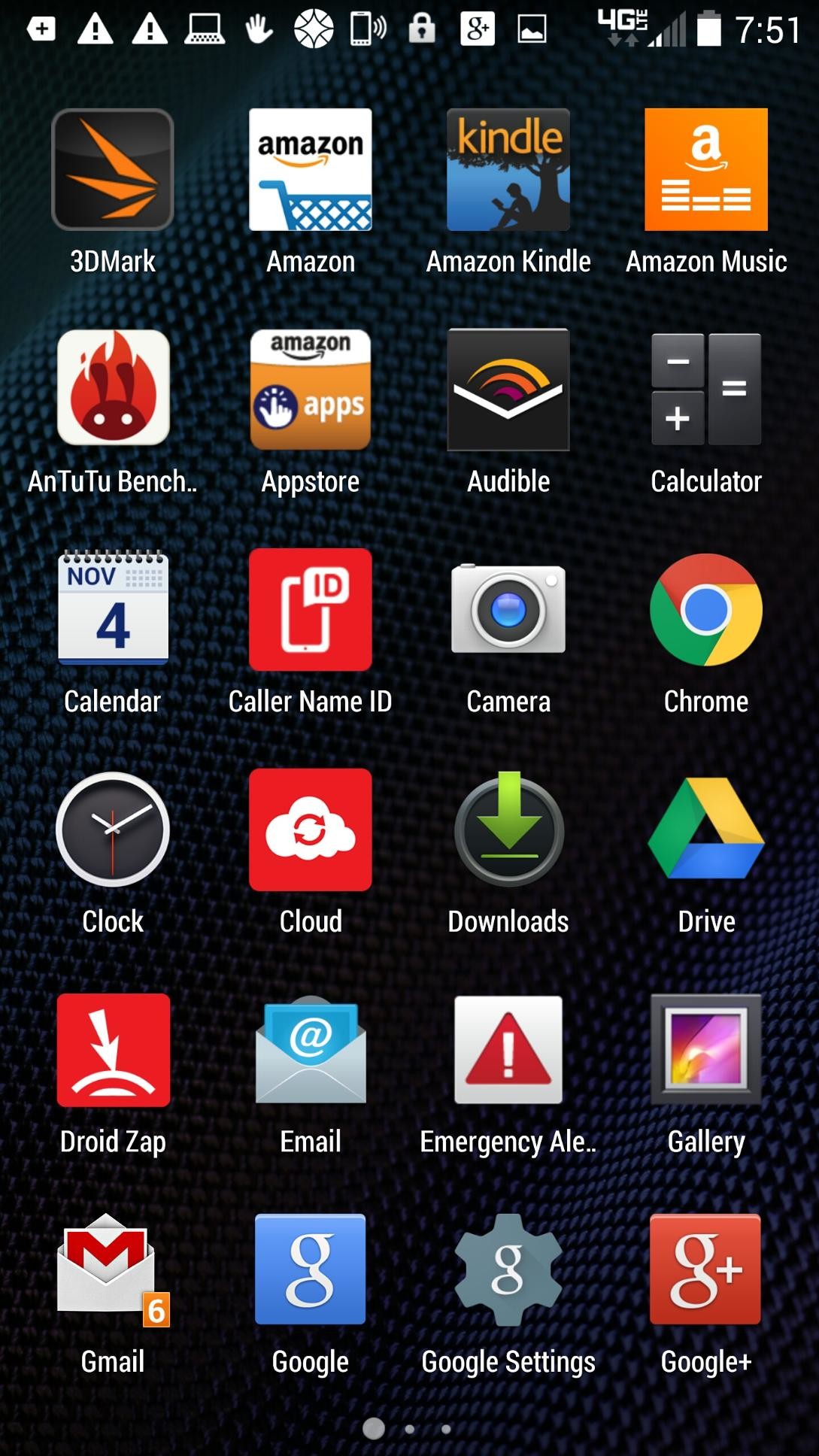 These apps do add value as they increase the functionality of the device by giving you new ways to interact with the hardware. Unlike the apps we will talk about below, Motorola has found a way to differentiate through hardware and apps instead of trying to re-skin the OS.

There are also a bunch of Verizon and other apps that come pre-installed as well, like VZ navigator, Droid Zap, VZ Protect and Cloud by Verizon. Additionally, there are four Amazon apps, Audible, IMDb, Slacker Radio, and Quickoffice. What we are saying is there are a lot of apps on here you will likely never use but come pre-loaded for your 'convenience' rather than letting you download them on an as-needed basis.

The Turbo in Droid Turbo is referring to the specs that are under the glass. The 2.7GHz Snapdragon 805 SoC with the Adreno 420 GPU runs all software without any hesitation. Games, email, Twitter, surfing the web, YouTube and the like all performed without any issue.

When you add that CPU/GPU setup with 3GB of DDR3 RAM, it becomes clear why this device is called 'Turbo'. Performance is good, although perhaps not the very best in all regards, but plenty sufficient for any power users. 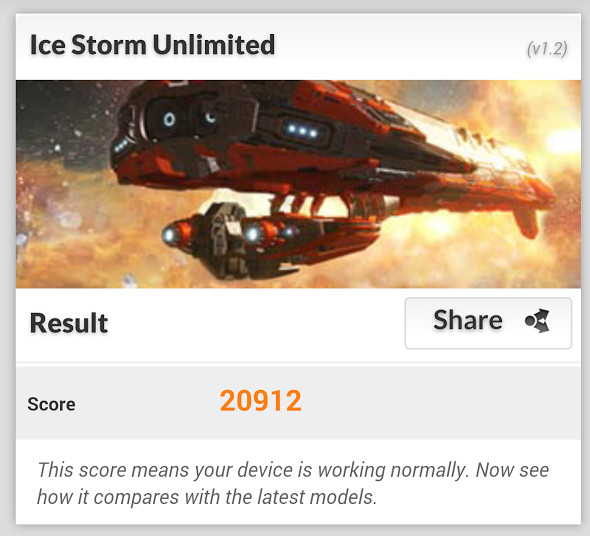 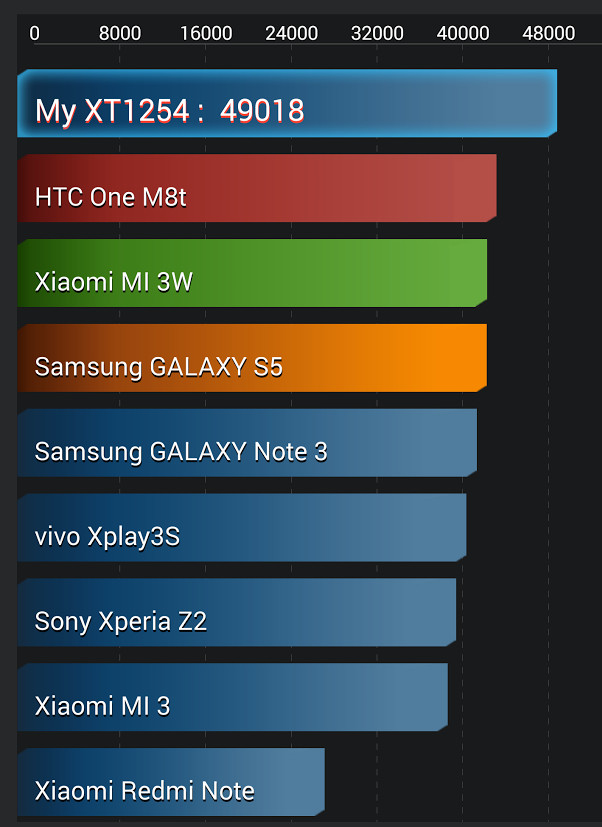 We ran the latest version AnTuTu and we also ran the 3D Mark test; for Ice Storm the Turbo kicked back a result of 20912 and AnTuTU posted a result of 49018.

At the end of the day, the Turbo will handle just about anything you throw at it, and will not be a barrier from buying this device. Also, with these high-end specs, during the two-year contract that you will likely buy with this device with, the phone should hold up well in terms of staying sufficiently powerful during that time window. 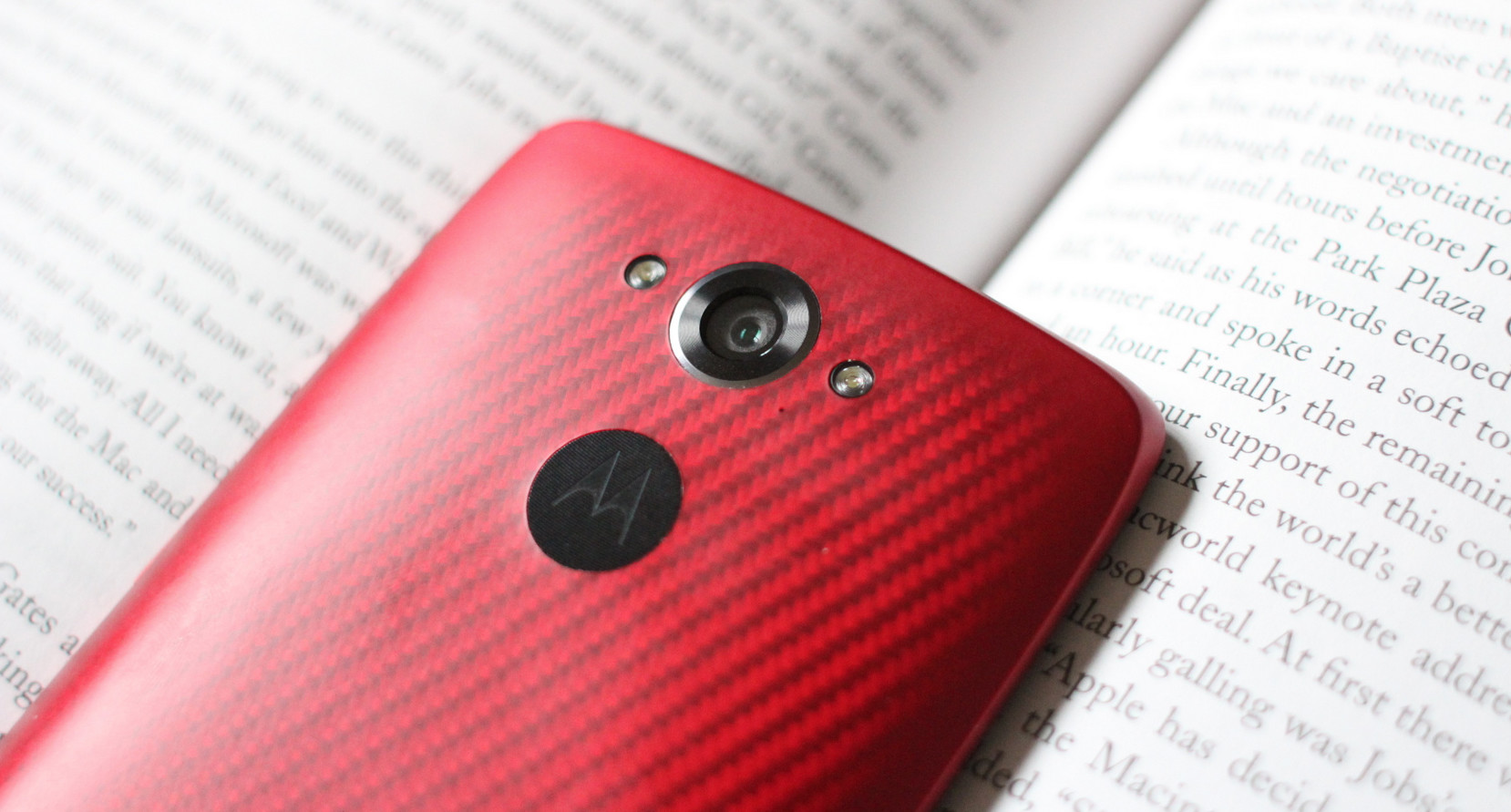 Motorola isn't exactly known for having amazing cameras on their phones. With Lumias and even iPhones generally besting Motorola, the company set out to change this by putting in a 21-megapixel camera in the back of the device.

But there is a problem, and it's with the software that you use to snap the photos. When you open the camera, you tap anywhere on the screen to take a photo. This works well if the camera auto-focused initially on your target subject. But if you are trying to shoot a fast moving object, like a toddler, it becomes quite hard to take a clear photo.

After you tap on the screen, the sensor will re-focus on the object and snap the image. The Turbo has a lag time of up to a half second which makes it very difficult to use the default settings. You can turn on a 'control focus' feature that does improve the experience and it is highly recommended you always leave this feature turned on.

There is a front-facing camera too, and at 2MP it gets the job done for taking selfies and that's about it.

Videos look average, not spectacular, but the Turbo covers the basics quite well. The color in the videos we sampled tended to be softer than we would have liked, but for the majority of users the camera will cover their needs. The video above is a sample recorded at 1080P, but it is worth pointing out that you can shoot 4K video as well.

Motorola is saying that the battery in the Turbo will last you up to 48 hours; in our testing, it will not achieve this. The 3900 mAh battery does pack a lot of juice, and after taking a look at the specs, you can bet that the phone needs a large battery. 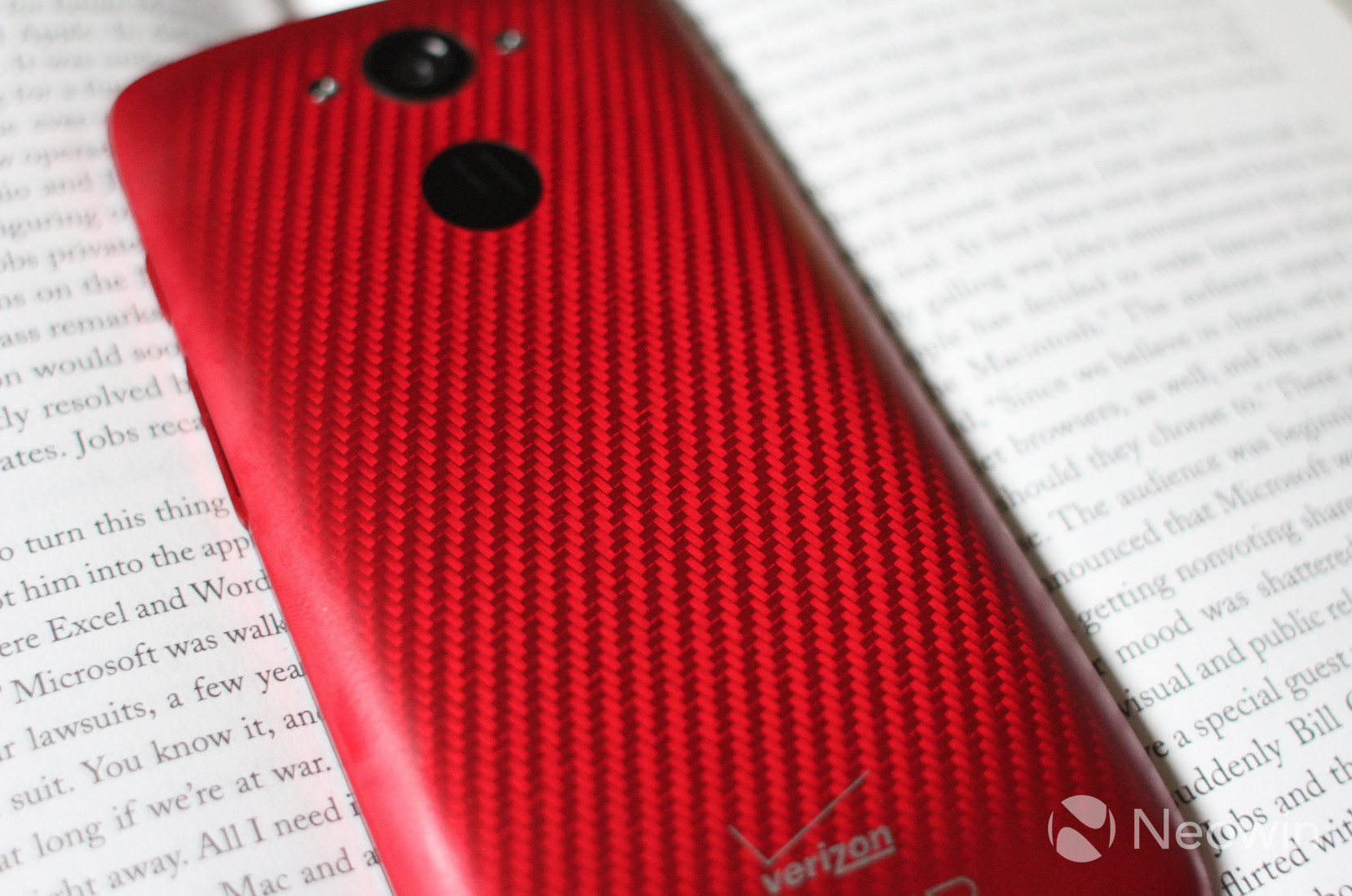 In our testing, we were getting around 36 hours of use before we needed to recharge, and under extreme use (including watching videos), the battery would last roughly 15.5 hours. You will be able to easily get a full day of use out of the device, even if you are a power user, but going two full days without charging seems to be a stretch unless you only use your device for the basics.

The Turbo also has a quick-charging feature which is quite handy. With a 15-minute charge you are supposed to be able to get 8 hours out of the device, and for the most part, this is pretty close to being accurate. After killing the battery, a 20-minute charge resulted in a tad bit over six hours of use, but we could have stretched it closer to eight if we had not been using the device heavily.

It is also worth pointing out that this phone does support wireless charging.

The Droid Turbo has a lot going for it from great specs under the hood, excellent battery life, and a mostly stock Android experience. While the build quality could be better and the screen a little bit brighter, for most users, the device is a winner.

The best thing about the Droid Turbo is that it gets out of the way. There is no dumb skin on the UI, the specs allow you to toss anything you want at it with no concern for performance, and the battery lets you live your day not looking for power outlets. And for us, that's exactly what we want in a smartphone.