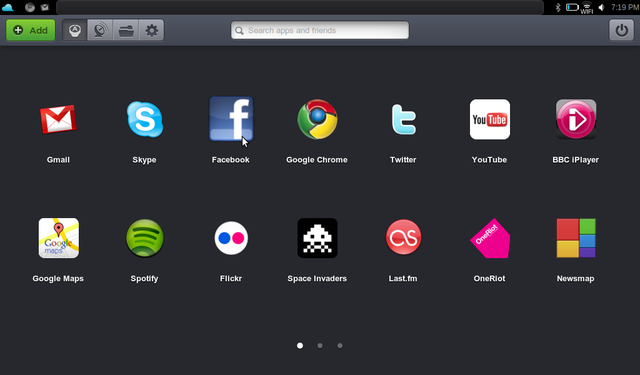 Jolicloud, the free netbook OS that strives to keep users always connected, has hit the 1.0 release milestone. An all new HTML 5-based front-end is the biggest touted feature. In a blog post describing the latest release, Jolicloud said, "Imagine an operating system centered around interacting with your friends. Imagine never having to worry about updates and software installs. Imagine that all your machines are automatically synchronized with one another. Imagine having your Internet ecosystem natively integrated to your machine, with all the coolest apps at your fingertips."

Utilizing cloud-based syncing, among the new stand-out features is the App Directory, a curated application library that is manageable from any HTML 5 capable device. From here, apps can be organized and installed, and deleted, with all changes automatically pushed to all Jolicloud devices on the same account. App updates are also automatically pushed-out so there is no need to manually update. Jolicloud focuses on cloud-based computing, but apps may also utilize local storage. Noteable apps include: Firefox, Facebook, Twitter, Spotify, Boxee, Hulu and more. Networking is also a focus with the Social Stream hub providing integration with Facebook, Twitter, Google Reader and more.

The real draw of Jolicloud is its fresh and streamlined interface. It is compatible with most netbooks, can be installed directly from Windows, and is a free download. This may be just the thing to make the aging netbook segment exciting again.