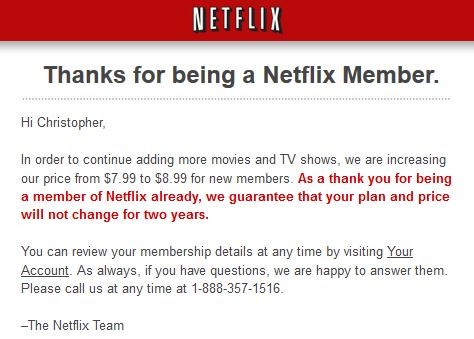 News of a price increase for Netflix's streaming service circled the Internet last month, and today we know the specific details. According to an email that was sent out to its customers, the price of a monthly streaming subscription is increasing from $7.99/month up to $8.99/month. That's on the low end of what the company was considering doing, based on their previous earnings reports.

On the bright side, Netflix is trying to build some goodwill by promising to lock in the price for current customers at $7.99 for an entire two years. Unlike cable providers, who routinely increase prices at the drop of a hat, this is a nice customer-friendly move by the company.

As more and more people cut the cord and switch entirely to streaming their content, cable companies need to be (and are) concerned. Adding an extra buck a month isn't going to dissuade many people from subscribing to the service, but will give Netflix some extra capital to increase their speeds with the local cable companies. Ironically though, the cable companies are still making money from streaming companies, as the recent deal between Netflix and Comcast illustrates.