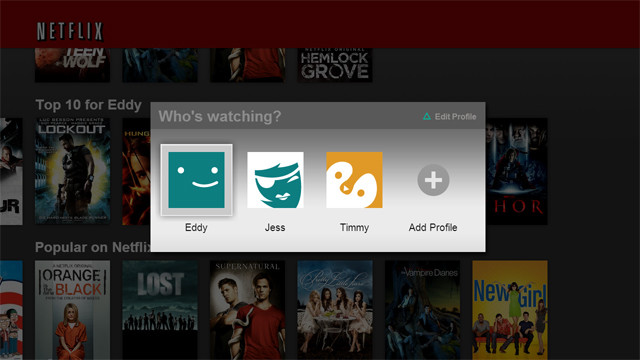 The new Netflix profile feature, as seen in the service's PlayStation 3 application.

Households using Netflix know the service can sometimes offer strange recommendations based on multiple family members using the same account, but the streaming service hopes to eliminate the issue by launching profiles, a system that will allow multiple users on the same account.

Profiles will separate an account with separate ratings, streaming queues and recommendations. Each account can have up to five profiles, which will be supported by most major Netflix apps – the company says its website and apps for the PlayStation 3, Xbox 360, iOS, Apple TV and most smart TVs already support the feature, and support for other platforms will roll out in the "coming months."

Each profile can be connected to a Facebook account, according to a press release issued by the company, allowing users to get suggestions based on friend activity on the streaming service. Profiles are available for free to all Netflix subscribers.

Netflix previously had a similar feature for DVD rentals, allowing users to separate their DVD queues, though it required members to log in and out of multiple accounts. The feature was planned to be scrapped on Sept. 1, 2008, though Netflix reversed its decision. Netflix's new profiles feature only requires members to log into the subscription account; after logging in, subscribers will be able to select individual profiles without entering different passwords. Usage of the Netflix website indicates information from the old profiles have been migrated to the new version, keeping previous user ratings.

Profiles began rolling out to Netflix users in all markets Thursday and will be available to all members within two weeks.