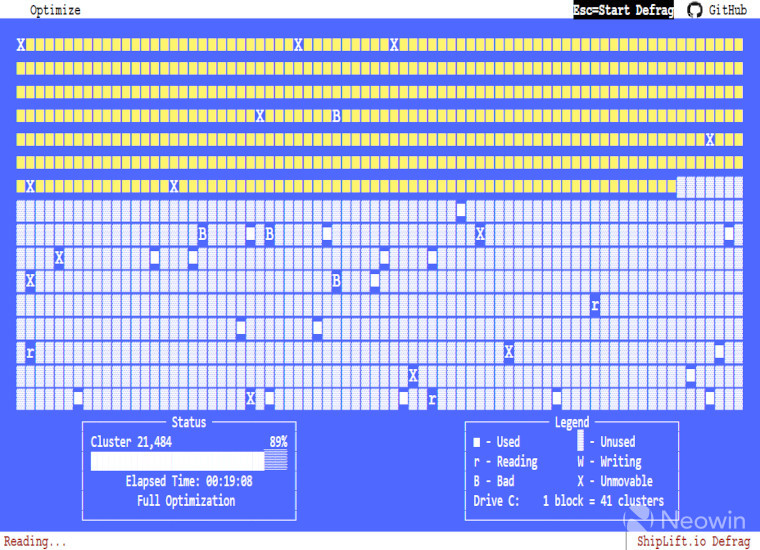 Remember the heady days of 1995? Your single exhaust fan is whirring, your external serial modem is chirping, and your hard drive is making some very concerning crunching noises. You have a paper due but you can’t get started because Microsoft Word won’t start. Hard drive noises intensify.

It’s your first computer so you don’t know much about these mysterious sounds, but the kid down the street says you can try defragging it. Defrag? Kids these days wouldn’t understand the pain we went through.

Developers Andrew LeTournaeu and Connor McCall of ShipLift LLC want to help us remember that pain with a new and excellent Vuex project aptly titled defrag. In fact, it’s so new that it doesn’t even have a proper readme file. But it’s very fun to watch.

Defragging is the process of consolidating your data on a magnetic hard drive. If you delete a file on these old spinners, you leave a gap, while new files are written further out on the platters. Defragging will take the newer data and rewrite it into the gaps, making your hard drive a solid block of data. At least for a little while. LeTournaeu’s app simulates this process, hoisting itself onto a familiar DOS-blue canvas. It doesn’t look like the Windows tool that I used, but it’s very reminiscent of the MS-DOS version. In fact, it looks like Spin-Rite does today.

There is a subtle CRT effect for added nostalgia, though after reading the package.json I can’t figure out which package provides it. It does however use Howler, which is an audio library for Javascript. This would suggest that the project will make noises at some point, but it’s silent for now.