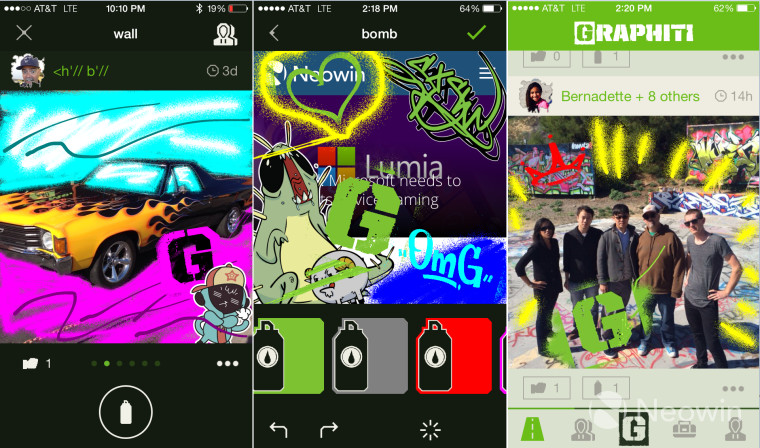 In addition to networking, SXSW is all about small brands trying to gain the public's attention. Today we spent some time with a new app, Graphiti, and talked with Bill Trost, the Creative Director of Graphiti Mobile, to get more information about the combination social/art app. Although released in the iTunes store earlier this week, it's making its launch here at SXSW.

Trost, best known as the co-creator of games like EverQuest, Defiance, and Koi Pond, was excited to talk about the latest app. At its core, Graphiti is a way to share creative content with small groups of friends or individuals. You can take a picture, mark it up with spray paint, stencils, and stickers, and then share it with people you know.

While this may sound a lot like Instagram or other painting programs, Graphiti goes a step further by trying to actually imitate street art techniques. To make sure the app was as accurate as possible, they teamed up with Writerz Blok in San Diego to ensure that they not only follow the proper lingo (calling stickers "slaps," for example), but also to keep the little details, such as paint can pressure and paint consistency, as accurate as possible. It's also more true to real-life than a typical painting app. When you apply a stencil, for example, paint colors remain on future uses, and if you apply too much spray paint, it starts dripping down and you can control it by tilting the phone around.

In addition to marking up images, the more interesting thing is marking up live websites. The app has a built-in web browser that lets you spray paint a site, share it with friends, while still allowing them to interact with the actual site. The idea is to share opinions with friends in a private manner.

Graphiti is targeted at millennials who want to express themselves through art, but there are still some features that need to be fleshed out. First of all, the app is only available on iPhone. While the company is working on an Android version, and expects to release it in May, a tablet version isn't expected to be released until the end of the year. In addition, the built-in browser is somewhat limited, and there's no easy to way "bomb" an entire webpage, instead having to do it in pieces.

When asked about competing with established brands like Instagram, Trost confirmed that they won't be unseating any of the established players in the near term, but they expect Graphiti to be used to compliment other apps, rather than replace them.

The app looks like fun, although the small screen of the iPhone seems to limit some of the functionality. It feels like this tool will really thrive when the tablet version is released.