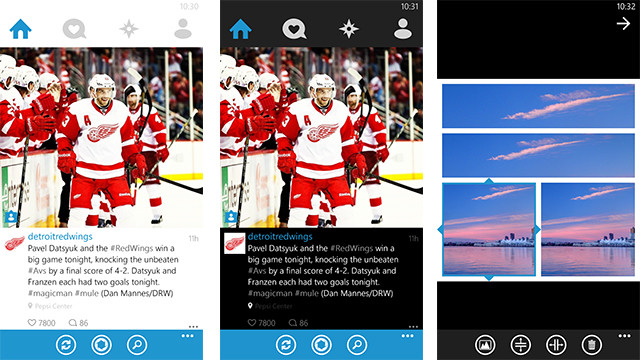 Much has been made about Windows Phone's lack of certain major apps such as Instagram, but does it really matter if third-party alternatives are superior? Rudy Huyn appears to be testing that theory with version 2.0 of 6tag, his unofficial Instagram app for Windows Phone.

Huyn, the Windows Phone app developer behind the third-party Vine app 6sec and an unofficial Wikipedia app, released the new version of 6tag on Friday morning with features that the social network's official iOS and Android apps lack. Among the new features are a dark color theme – similar to the recent update of the official Twitter app on Windows Phone, which added a dark theme – as well as the ability to create collages within the app and draw blurring boundaries.

The ability to create collages and specialized blurring are features absent on Instagram's iOS and Android apps and something users have long had to rely on other apps for.

In addition to the functionality changes, Huyn's app now allows photos to take up more space on the photo feed, providing a more vibrant experience. Other changes include the ability to locally save a high-resolution copy (up to 2048x2048) of photos uploaded to Instagram and support for the social network's new upload resolution (640x640, up from 612x612).

The new version of 6tag is currently available in the Windows Phone Store for free; a one-time $1.29 in-app purchase removes ads, which are primarily found in 6tag's profile pages.

Huyn has quickly become the standout developer of the Windows Phone app scene, winning Microsoft's "Next App Star" contest in April with his unofficial Wikipedia app and releasing the popular 6sec app before Twitter even announced an official Vine app for Microsoft's mobile operating system. Despite the success of Huyn and other developers, however, the lack of certain official apps on Windows Phone has routinely been cited as a major drawback of the platform by critics.