As previously rumored, Nintendo have issued a press release today confirming the upcoming release of a new Nintendo DS. The Nintendo DSi LL has two screens both measuring at 4.2 inches, but the resolution is exactly the same as the current DSi, meaning it's more likely to be marketed towards the elderly or those with poor eyesight.

Due to the larger screens, the device itself weighs 100g more, but it also benefits from a larger stylus and a longer battery life. Right now, it seems Nintendo are only releasing the DSi LL in Japan, where it will go on sale for 20,000 yen (about $220). For comparison's sake, the DSi, released only a few months ago, cost around 18,900 yen at launch.

With Nintendo marketing itself towards a wider audience for a while now, the move is logical, and it solves an issue likely to be holding off a lot of potential buyers. The question here is whether or not Nintendo will be able to drum up interest in what is essentially a five-year-old gadget. Sales figures for the DSi show certain groups are still interested, but a larger-screen DS seems like a move that should have been made a long time ago. 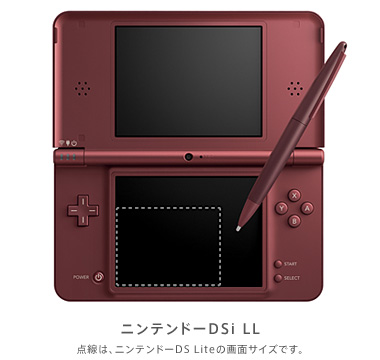