Earlier this week, Microsoft announced the launch of the Nokia Lumia 930 in the United Kingdom, with availability beginning next week. Today, pre-orders opened for the new flagship Windows Phone 8.1 handset at one of the UK's largest independent device retailers.

The Lumia 930 can now be pre-ordered from Carphone Warehouse, and is available free - or 'with no upfront cost', if you prefer - on 24-month plans costing as little as £30.50 per month. However, for that price, Vodafone will only give you 300 minutes and 250MB of 3G data, along with unlimited texts.

For £36.50 a month, you'll get 7GB of 4G data with unlimited minutes and texts on Vodafone, or with O2, you can sign up for £33 a month for a similar deal, but with just 2GB of data, and you'll have to pay £9.99 upfront for the handset. These are just examples, and there are plenty of other contract options available, although only Vodafone and O2 contracts are currently listed on the site. 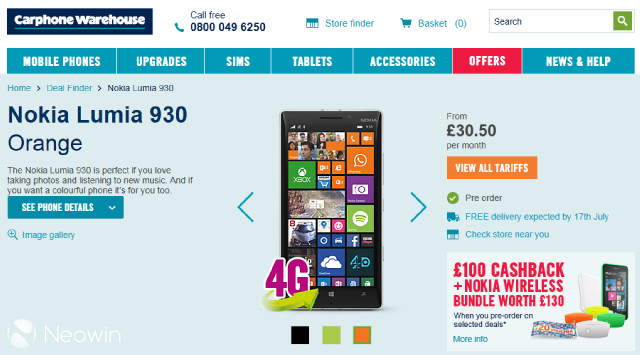 Microsoft says that EE will also offer the Lumia 930 on its 4G network, while Vodafone and O2 will soon sell the device directly to their customers as well. Retailers Amazon and Tesco will offer the 930 too, as will Phones 4u, which will exclusively stock the white version of the handset in the UK.

The Lumia 930 will be available on July 17, and each one sold will include a free wireless charger in the box. Everyone who buys the device in the UK from participating retailers before July 31 will also get a free promotional bundle worth £130, which includes a portable wireless charger, the Nokia MD-12 portable wireless speaker and a voucher worth £20 for the Windows Phone Store. Carphone Warehouse is also offering £100 cashback on certain contracts.