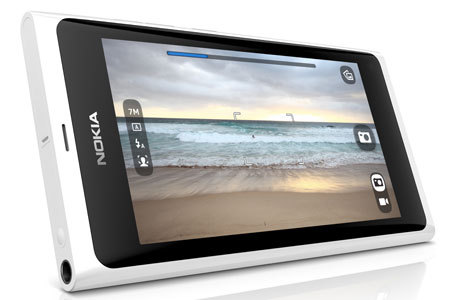 If you have been waiting to purchase a Nokia N9 smartphone just because you didn't care for the color selections, you will only have to wait a few more weeks before getting at least one more color choice. Nokia announced today that it will be releasing a white version of the Meego-based smartphone.

The white version will also have a glossy finish which should make it look different than the black, magenta and cyan versions which have a matte finish. The white version will become available for sale in the countries where the N9 is offered before the end of 2011, starting with the more expensive 64 GB version.

In related news, Nokia said that a new software update for the Nokia N9 is in the works. The update will be made available for download before the end of the year. Nokia says that the update will include " ... usability improvements, like music controls keys from the lock screen or closing apps by swiping them down by default and NFC tag reading is also added." Nokia has previously released a software update to the N9 back in October which you can read more about here at Neowin.

Even though Nokia plans to start selling its Windows Phone-based Lumia smartphones in the US in the early part of 2012, the company still has not indicated that it will offer the N9 here in the states.