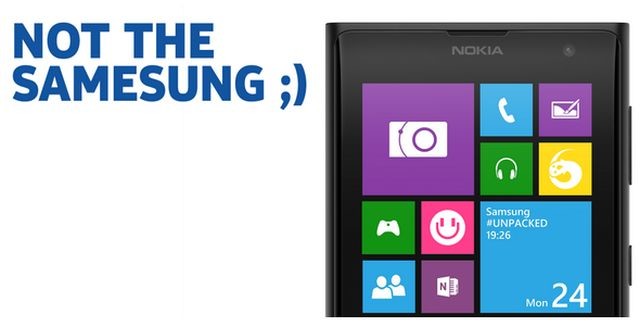 Samsung announced the Galaxy S5 smartphone today, for a worldwide launch on April 11. However, it only took a few hours before Nokia started poking fun at Samsung on its UK Twitter feed.

The company's post featured an image of a Lumia device, running on Windows Phone, along with the tagline "Not The Samesung." The actual Twitter message is shown below:

Stand out from the crowd! #MWC14 #UNPACKED pic.twitter.com/NFPTd5vNzV

Nokia is no stranger when it comes to mocking Samsung product announcements. It did much the same thing in 2013 when Samsung revealed the Galaxy S4, and hinted that the company was copying features that Nokia had already put into the Lumia lineup.

Of course, Nokia revealed its lineup of Android-based Nokia X smartphones today, and the company's main Twitter feed has been quite busy posting a number of odd messages and images that are direct responses to other comments made about the phones. Here are just a few of them.