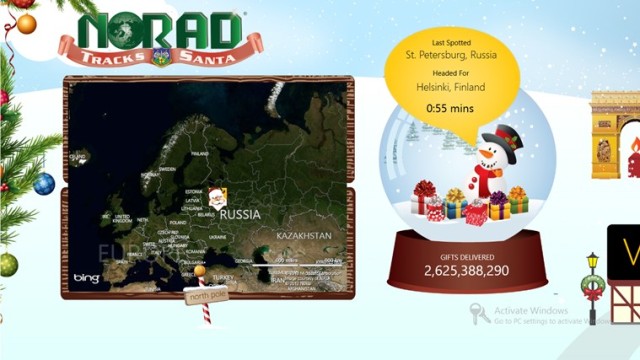 Starting in 1955, the North American Aerospace Defense Command has sent out updates on Christmas Eve and early Christmas morning as it tracks the path of Santa Claus. The service will continue this year and as part of its coverage of Santa's trip, NORAD has released its official Windows 8 app for the event.

The Windows Store website has more information on the free app, which also runs on Windows RT. While we still have over two weeks to go before Santa, his sleigh and his many reindeer make their annual global trip from the North Pole, the app still has a lot of information on NORAD's mission to keep their many eyes out on St. Nick.

As to why a division of the U.S. military would even bother with tracking a character like Santa on Christmas Eve, it turns out this whole thing started with a typo. The Sears Roebuck store in NORAD's home town of Colorado Springs, Colorado, ran an ad in the local newspaper in 1955 where kids were supposed to be able to call Santa directly. However, the phone number printed in the ad was in fact the hotline for the Commander-in-Chief's operations at NORAD

Instead of going Defcon 1 at their phone number being released to the general public, the Director of Operations at NORAD decided to instead take phone calls from kids and tell them the location of Santa Claus on Christmas Eve. The tradition has continues to this day, but NORAD has added features like real time Internet updates to keep tabs on Santa's journey.