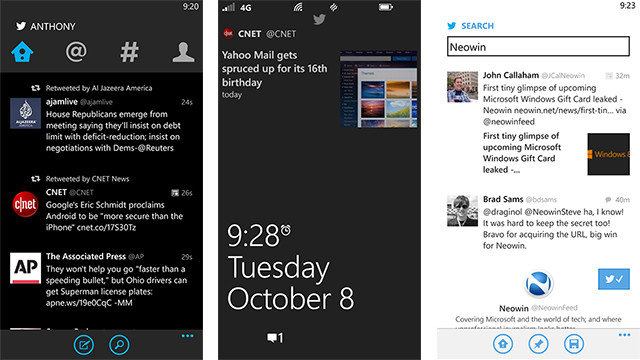 Twitter has released a significant update for its official app for Windows Phone, bringing several new features as well as many minor tweaks.

As outlined in the app's Windows Store listing, users can now select a dark theme, changing timelines to show a black background instead of the standard white background. The first version of Twitter's Windows Phone app featured both dark and light themes, though the feature was removed when the social network released its redesigned app in February.

Custom notifications are also supported now, with users available to select accounts to receive Windows Phone toasts when tweets are sent. Other major additions include a lockscreen that "highlights interesting tweets on your homescreen" and improved search features, such as automatic suggestions and results that include both users and tweets. Keyword searches can now also be pinned to the Start screen with their own specific tile.

In terms of minor additions, the app's previously released automatic translate feature has been updated to include support for 13 new languages. Several other small, undocumented changes also appear in the update, such as a slight gradient below the top navigation bar when scrolling down a timeline.

The new app is currently available for download or update in the Windows Phone Store.