Back in December, tech start-up OnePlus announced its plans to create the "perfect smartphone". The company said that consumers should "never settle" when buying a device, adding: "We don't accept the excuse that you can't create a perfect phone at a disruptive price."

With just days to go before its official launch, and following weeks of slowly drip-feeding new details about the device, the company has now revealed more information regarding pricing and availability. The OnePlus One will launch in sixteen markets initially:

Exact pricing info has not yet been revealed, but we would expect the cost of the device in each market to be pretty close to the amounts listed above.

Whether the One will live up to the considerable hype generated by the company over the last few months remains to be seen. However, on paper, it looks like a pretty compelling proposition, as this mini spec comparison with Samsung's new Galaxy S5 suggests: 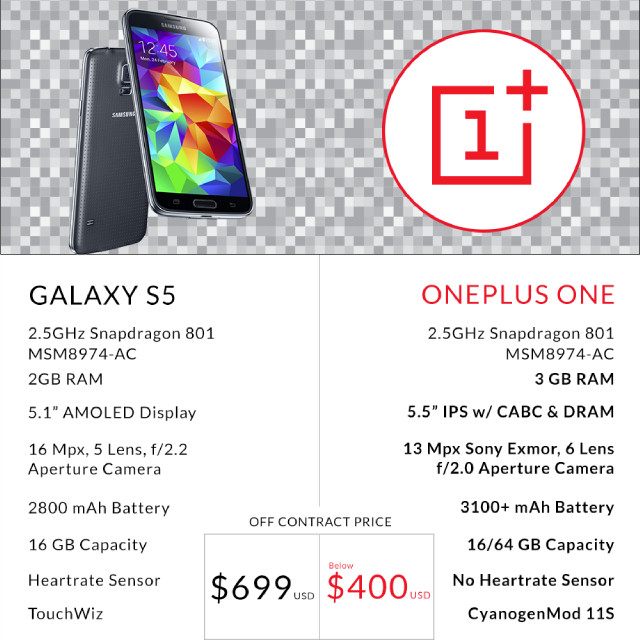 The One beats or matches the S5 on most key specs, including its 2.5GHz Snapdragon 801 SoC, 3100mAh battery, larger 5.5-inch display and 3GB of RAM. Even so, OnePlus says that its handset will be over 40% cheaper than the S5. The device fares similarly well in a OnePlus comparison with Sony's Xperia Z2.

The handset itself has still not been shown, even after all of the info that has already been revealed. But right on cue, everyone's favourite leaker, @evleaks, gave a glimpse of the device this morning, albeit in several unassembled pieces:

OnePlus One, not quite ready to debut. pic.twitter.com/2EGkInt43b

(Given the wording of his tweet, which could be read as an indication that the handset's launch has been delayed, we double-checked with Evan to confirm that was not the meaning he intended.)

In addition to promising that the device will be the "perfect smartphone", OnePlus raised expectations further in a Facebook discussion back in February, by saying it was "committed to creating the best smartphone ever". If you think this all sounds a bit too good to be true, you're not alone - many have expressed skepticism over whether the company can really deliver on its lofty promises. But with less than a week until the launch of the OnePlus One, at least we don't have to wait too long to find out.