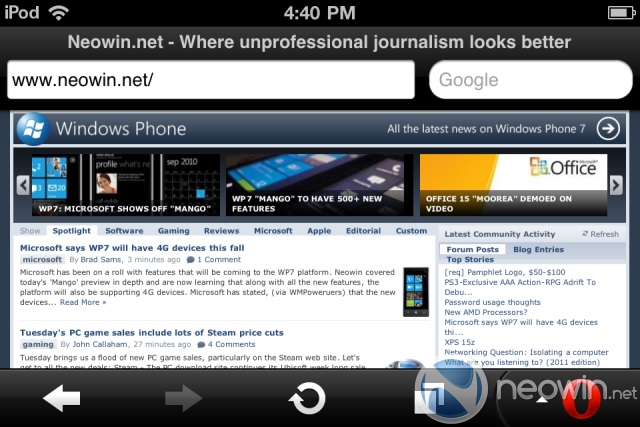 It's been almost a year since Opera Mini made its debut on iOS. Upon its release, it shot right up to taking the #1 spot for free applications in almost all regional locales for the App Store. Its popularity was and continues to be the compression it applies to your web traffic, which not only speeds up loading of sites on slow networks (not necessarily the case for Wi-Fi connections, however), but it saves a ton of data off your data usage bill. Opera claims its compression can reduce up to 90% of data usage.

Despite its popularity, the browser had its flaws, at least on the iOS version. The initial release lacked inertial scrolling. The fonts were limited to only one type and had kerning issues (fonts were too spaced out). There were only two zoom levels, and on the lowest level, the browser did a cheap trick by replacing the fonts with generic rectangular bitmaps. Also, given that the pages were sent as optimized bytecode to the device from Opera's servers, some pages had a broken layout. And finally, the browser wasn't optimized for the Retina Display resolution, giving the browser a blurry appearance on iPhone 4 and the iPod touch 4.

These issues have been addressed in Opera Mini 6, which is now available for all iOS devices - iPhone, iPod touch, and an iPad-optimized version.

The browsing experience has been much improved, with a restyled header and footer, giving it a dark Safari-like appearance. Font rendering, zooming, and panning are all much on par with Safari - page zooming has a nice fade effect for bringing in "checkerboarded" areas of the page into view. Some pages still appear a bit broken, but there's little Opera can do in this regard unless people move over to Opera Mobile (or if Apple ever changes their App Store policies). And finally, the browser still boasts instant forward and back page navigation.

Here's a quick comparison of Neowin's front page rendered in both Opera Mini and Safari:

You may download the browser from this link and read the offical blog post here. Also check out the gallery below for full sized screenshots of the browser.