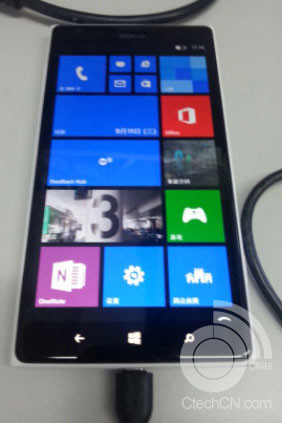 Nokia may have delayed the Lumia 1520's official announcement, but that doesn't mean leaked photos of the 6-inch Windows Phone device have stopped making their way to the Internet.

According to CtechCN, the most recent photos of the first 6-inch Windows Phone device were leaked by an employee of China's telecommunications regulatory agency, the Telecommunications Equipment Certification Center. The smartphone is reportedly being tested by the agency prior to its release in the country, which is expected to happen after a U.S. and European release.

Previously reported information stated the Lumia 1520 will feature Qualcomm's quad-core Snapdragon 800 processor, 2GB of RAM, 32GB of storage and a 20-megapixel rear-facing camera. The phone's 6-inch screen will reportedly have a 1080p resolution, which Microsoft will begin supporting with its upcoming GDR3 update for Windows Phone 8. The update adds two additional columns of the smallest size tile to the operating system's home screen for devices with 1080p resolutions.

Nokia allegedly delayed the Lumia 1520's official announcement from Sept. 26 to Oct. 22, when it's expected to be revealed alongside the company's rumored Windows RT tablet. Both devices are rumored to go on sale in the U.S. and Europe sometime in November.