The wait is finally over: Pinball FX2 is now available for free download on the Xbox One. Although the game was supposed to be released on July 31st, Zen Studios ended up pushing the release date back once Microsoft confirmed that they would allow previously purchased tables to be imported into the Xbox One version, and that was the right decision to make.

Finding the game in the Xbox One store is difficult, to say the least. Scrolling around in the "New Releases" section showed no sign of the pinball game, so the only way to get the free download was to manually search for "pinball." This is more of a knock against Microsoft's storefront than anything else though. Pinball FX2 includes the Sorcerer's Lair table for free, which we reviewed and gave a 9 out of 10, so if you're new to the platform, it's worth picking up just to try out. 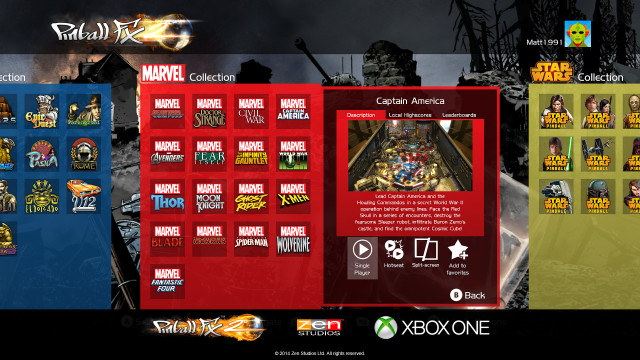 As mentioned earlier, previously purchased tables can be imported into the Xbox One version. Unfortunately, the process is not as streamlined as it should be, although, we suspect this is more to do with the Xbox One platform than the developers at Zen Studios. Once you load Pinball FX2, you'll see all of the tables organized by collection. Instead of the game automatically downloading tables you're eligible for, you have to highlight each pack, select it, agree to a $0 purchase, select it again, and then click "install" to begin the installation. In addition, for me, the Star Wars tables would not give the option to install from within the game, so I had to go to the Xbox One store and install from there.

The latest table, Guardians of the Galaxy, is available for $2.99 and my initial impression is that it's a fun, action packed table. Expect a full review in the near future. The next table, The Walking Dead will be available for Xbox 360 on August 27th and Xbox One on August 28th.