Information about Microsoft's Xbox One leaked long before its formal announcement in May thanks to an Australian teen with access to its development kit. According to recent police filings, the teen, Dylan Wheeler, is now denying police access to his laptop.

The West Australian Police claim Wheeler, known by the nickname "Super DaE," refused to grant access to his laptop despite being served a data access order compelling him to do so. According to the filing, Wheeler initially told officers he would enter the password himself since it "required some forensic preparation prior to any access attempt." Police claim Wheeler then refused to input the password, saying the input method was "taking too long" and later claiming he forgot the password because he changes passwords "all the time."

Police also say Wheeler declined to even say what kind of characters make up the password, though the teen reportedly says the entire police filing is a lie. An article by Kotaku Australia, citing Wheeler's private Twitter account, says the teen claims no such encryption exists on the laptop. 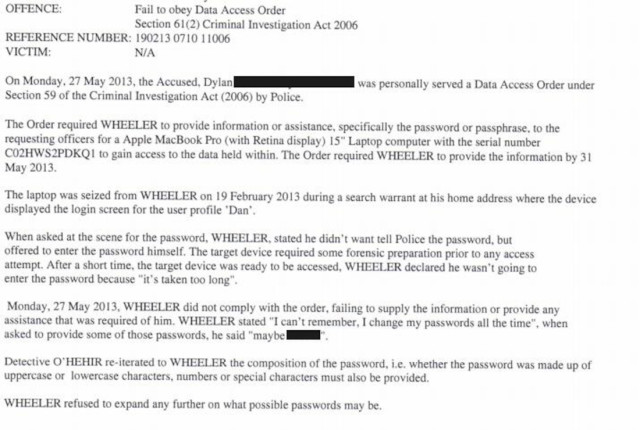 Australian authorities and the FBI raided Wheeler's home in February after he attempted to sell an Xbox One development kit online. Microsoft denied any involvement in the raid, saying the company "did not initiate this FBI investigation with this individual" and that its private corporate network had not been compromised as Wheeler claimed. The teen said he was able to obtain Xbox One development kits by gaining access to the company's servers and creating a false account on the Xbox Developer Program website.

Wheeler threatened to leak more information about the Xbox One prior to his arrest, though he never followed through with the claim.