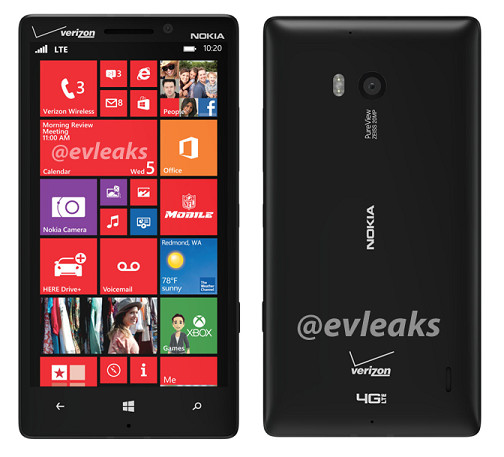 As the world waits for the 6-inch Lumia 1520, a press image of a new Lumia, allegedly known as the Lumia 929, has been leaked by reputable industry source @evleaks via Twitter.

The Lumia 929 is likely the RM-927 device which was earlier revealed in a FCC filing earlier this month. The phone is expected to have a 4.5- to 5-inch screen with a 1080p resolution, given the extra tile columns seen in the above render.

As the rear-facing picture suggests, the Lumia 929 will have a 20-megapixel PureView camera with a Carl Zeiss lens. Other specifications revealed by the FCC filing include LTE, NFC, 802.11ac Wi-Fi, and Bluetooth 4.0. Information about the underlying chipset and memory is not yet known. According to @evleaks, Lumia 929 will come in black and white color variants.

Nokia is expected to launch the 6-inch Lumia 1520 smartphone and Lumia 2520 tablet at an event on Oct. 22. Since this is a Verizon-bound device, it could be revealed at the same event or a separate event in the U.S. in the near future.