When it comes to learning new programming languages, knowing which is in demand is a helpful tool. With the market constantly in flux, the IEEE Spectrum research group have compiled a complete list of languages and their influence across the industry. The report also points out which languages are the most popular with recruiters, amongst other things. 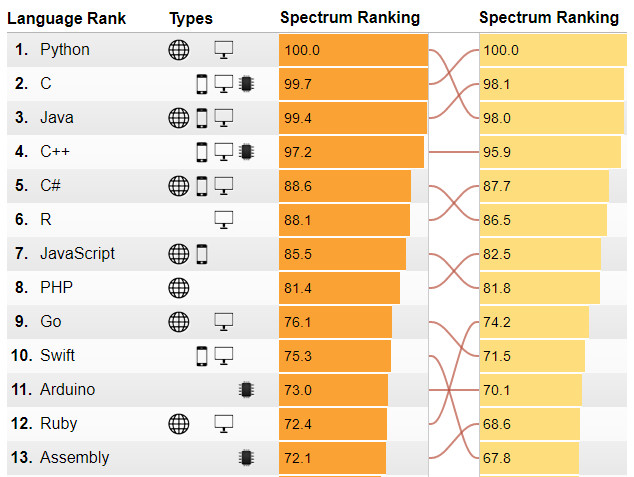 According to the research group, Python took the top spot as the world's most popular language jumping from third place in 2016, with C and Java taking second and third place respectively. Recently we reported that Java was being replaced by Stanford University as an introductory language, mainly due to the fact that it was 'ageing' and discouraged students from taking the CS 106 course, replacing it with JavaScript. However, according to this report, Java remains the most popular amongst recruiters (when adjusting to the Jobs weighting), making it a hard requirement when applying for that Software Engineering job.

Go, a new upstart language spearheaded by a team at Google is making headway amongst developers as well. The language grabbed ninth place overall. Amongst recruiters, it skyrocketed in popularity going from near obscurity to ninth place. The open-source project was developed to address several criticisms surrounding other languages in use and can be used to develop for the web, desktop, and mobile.

IEEE Spectrum used several metrics to gather its data, mostly through tracking the popularity on sites like Github and Reddit amongst others. You can read a full breakdown of its methodology here.