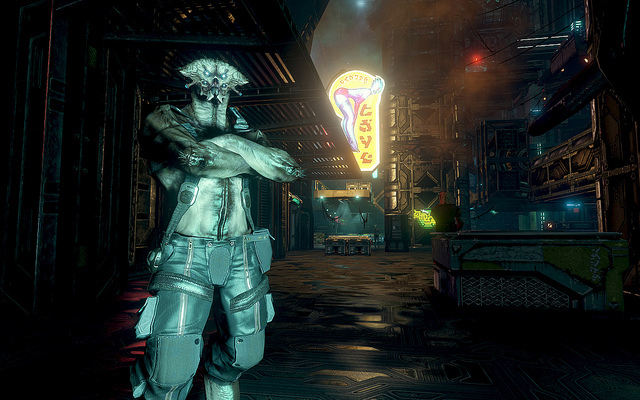 In 2006, Human Head Studios released Prey, a sci-fi shooter that had originally started development under 3D Realms. The big hook of the game was that it used portals to create instant teleports in the game's levels. The game sold well but later 3D Realms sold off the rights to the IP to Bethesda Softworks. Human Head, however, decided to continue with the Prey franchise. Earlier this year it was confirmed that Prey 2 was indeed under development and would be released sometime in 2012.

At QuakeCon 2011, Human Head's co-founder Chris Reinhart gave a live demo of Prey to for a large group of QuakeCon attendees. The sequel's main link to the original is that it begins near the start of the original Prey where you see the airliner that has been transported in the alien ship crashing. Prey 2 starts inside the plane where US Marshall Killian Samuels managed to survive the crash. He also manages to shoot some of the ship's aliens before being hit and going unconscious.

Reinhart then told the crowd that the story jumps ahead several years as Samuels wakes up on the planet of Exodus. He has no memory of what happened in between the plane crash and now but apparently he's been spending time on the planet as a bounty hunter. Prey 2 will center on Samuels's adventures in Exodus as we and he learn what exactly happened to him in those missing years. Fans of the original game will be happy to know that the lead character from Prey, Domasi "Tommy" Tawodi, shows up on Exodus as well and also apparently knows Samuels.

The rest of the demo took place about a quarter of the way in the game as we see Samuels taking on various bounty hunter tasks in this densely populated portion of the planet. The city includes a lot of tall building and structures and Samuels is apparently strong enough and powerful enough to jump onto the sides of these buildings and clime up to various levels.  He can also hold onto a building rail with one hand and shoot with the other. The demo showed off the fact that Prey 2 gives the player a ton of options. Samuels can be played as a nice bounty hunter or as a nasty guy who doesn't think twice about throwing an innocent bystander off a rail to his or her death. 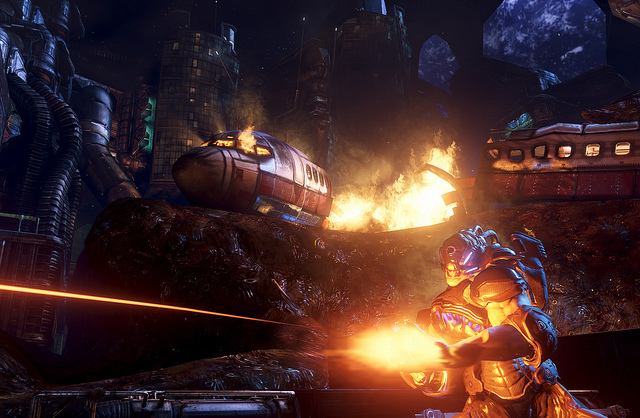 The game can sometimes give the player some random situation such as helping an alien out if he's getting kicked and beaten by some nasty folks. Or the player can just ignore those poor souls and be on his way. The player gets to use a scanner that can determine if a NPC is friendly, possibly mean or downright hostile. It can also be used to track bounty targets. In one instance we found a bounty in Exodus' version of a strip club. The bounty, naturally, decides to run so we got to see a fairly fast moving chase through the streets and rooftops of the city before capturing, and then, killing the bounty.

One mission that Samuels takes on was especially tricky as the bounty had the ability to teleport short distances. Since Samuels doesn't know where the bounty is located he has to go to somewho who does and "persuade" him to give the information. Once at the bounty's final location we find out that he is also getting some help from his alien buddies who try to slow Samuels down and help the bounty escape. During this part of the demo, we got to see a couple of the cool items used to take out mass amounts of foes. One is the shoulder mounted rocket launchers which got a big positive reaction from the QuakeCon crowd. The other item used was the anti-gravity grenade which sends enemies flying up and makes them easy picking for some gun action.

The end of the Prey 2 demo sees Samuels finally capturing his teleporting bounty and sending him to his clients as instructed. However this decision didn't make someone else very happy. We got to see a very big enemy with big weapons encased in a big mech like armor that wanted to do some damage to Samuels.

Prey 2 may differ quite a bit from its predecessor but Human Head seems to want to make a single player sci-fi shooter with a ton of freedom to do what you want. It also helps that it looks great. It's using id Software's id Tech 4 but in a highly modified state that makes this game look like you have stepped into the set of Blade Runner with all of the neon lights and seedy environments. While there are no portals in this game, Prey 2 is looking like it will be a very entertaining title. We will hopefully learn more before the game comes out for the PC, Xbox 360 and PS3 sometime in 2012.