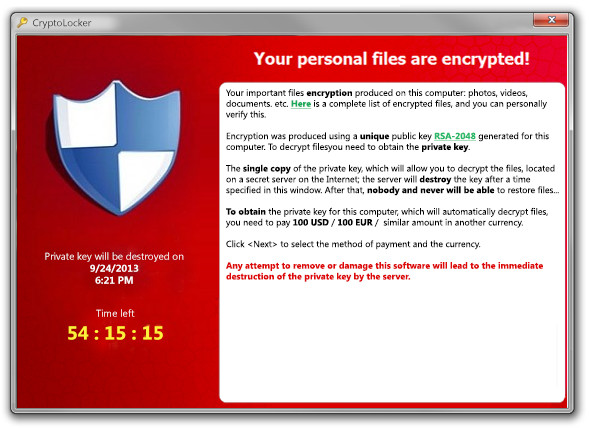 An email attachment seemingly sent from financial institutions could threaten millions of users, particularly those in the UK.

The legitimate looking email installs ransomware “Cryptolocker” after an attachment is opened, immediately encrypting files. It also unleashes a bogus countdown timer designed to force panicked users to pay immediately. According to the BBC, users are ordered to pay two Bitcoins, or around US$1233 to have the files supposedly unencrypted and restored.

However, the NCA says ransom payments are not endorsed as there is no evidence that files will be unencrypted after complying. Deputy head of the National Cyber Crime unit Lee Miles says the criminals are targeting small to medium businesses and must be stopped.

"The NCA are actively pursuing organised crime groups committing this type of crime. We are working in co-operation with industry and international partners to identify and bring to justice those responsible and reduce the risk to the public."

This is not the first time a ransom virus has threatened PC users.  Earlier this year, the notorious FBI ransomware locked out users of their devices until a ransom was paid. Although the earlier form of malware is still widespread, Cryptolocker could pose even a greater danger in the long term.

Neowin users are encouraged to practise safe browsing habits. Be wary of emails even if it appears it comes from trusted sources. Readers are also advised to scan files with a trusted and updated anti-virus program. Anyone affected by this malware should report it to local authorities immediately.