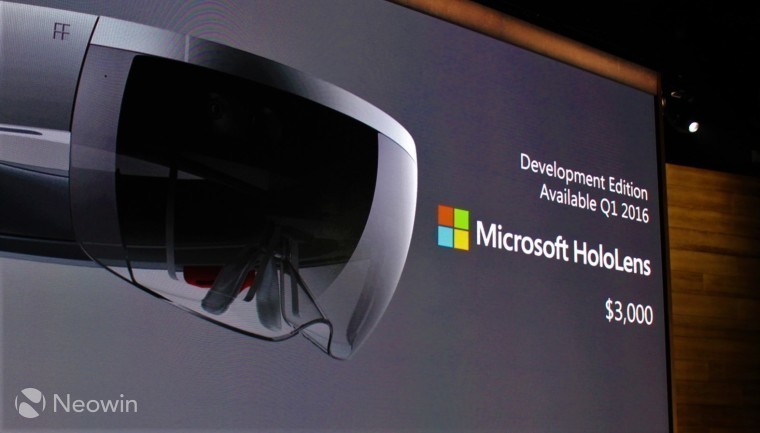 There's certainly a lot of anticipation about Microsoft's augmented reality headset. When we had a chance to demo the device, we were blown away with how futuristic it felt while at the same time being absolutely real. Last year, Microsoft told us that the device would be available in Q1, 2016, and cost $3,000 for the developer kit.

If an article by Fortune (that has since been pulled from the site) is to be believed, it looks like the price tag was correct, and the release date is going to be March 30th, just under the wire for the first quarter of the year. The pre-order will begin on February 29th. Aside from the development tools themselves, the dev kit is said to come with a few goodies as well, including three games: Fragments, Young Conker, and RoboRaid.

Fragments is a crime game that takes place in your living room, allowing you to investigate the case and interview characters that will appear to be in the same room as you. Young Conker moves the classic squirrel from Rare into your world. Asobo Studios, the company behind Young Conker, promises that, "the game changes based on what environment the gamer is playing in." Lastly, RoboRaid is a first-person shooter where aliens literally rip through the walls of your room, similar to how NFL players tore through the wall in Microsoft's vision for NFL football. According to the article, RoboRaid took a team of eight people only 12 weeks to create, showing how easy it is to develop for the hardware platform.

While it remains to be seen how well HoloLens will work in the real world, the potential is definitely there and we're excited to see how it develops.

Will you be purchasing a Developers Edition HoloLens?