Mozilla Firefox is one of the most popular web browsers in use in the present day, and due to its open-source nature, Firefox has always had a good starting position. Of all the platforms it's available on, it never really took off on Android devices, but Mozilla are now tackling this, as CNET report.

The revised mobile version of Firefox is, at present, only available on the Nightly build channel. Should everything go well, the browser will filter down through the different channels before entirely replacing the older Firefox. Since Firefox is only available on Android, Mozilla's battle to gain a foothold could be a challenge. The fact that the browser sports a name as well known on the internet as Firefox could tempt some people away from their current mobile browsers, and the redesigned and enhanced browser has the potential to rocket to the top of the download chart when it's made available through the main channel.

Mozilla will also hope that developers move quickly to update add-on extensions that no longer work with the nightly build, and is presently trying to find a way to make developing add-ons to replace those rendered incompatible faster. The company believes it may be possible for them to make use of their Mozilla Labs' Jetpack extension in order to make use of currently existing apps. 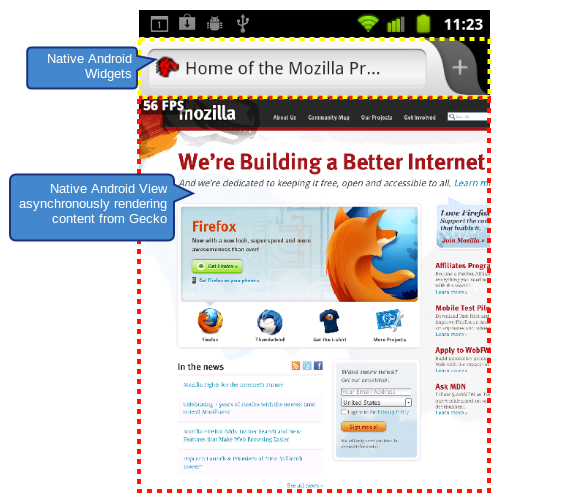 Due to the nature of the Mozilla community, and its structure of both end-users and developers, the community has not been outspoken regardless of which side of the fence they sit on about the change. Of the people who make their opinions known, many of them want to retain the current build of Firefox due to the large number of add-ons available for it. Those who want their browser to evolve into Mozilla's new design are heralding the improved performance and smoothness of Firefox on mobile.

Whatever your opinion of the change, the browser's new look should win a lot of people over.