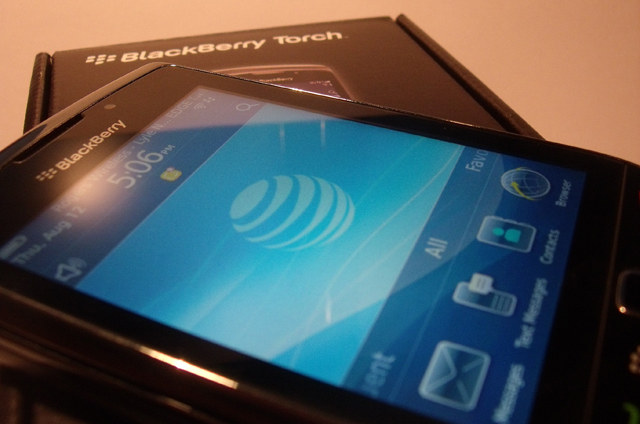 The Hardware
The BlackBerry Torch has all your standard BlackBerry buttons, including the send key, quick menu, trackpad, escape/back key and the end/power key. The trackpad is very smooth and very sensitive on this device when compared to other BlackBerry phones; this allows you the freedom to select even the smallest of objects on the web or within application. The Torch also comes with a silent and lock button located at the top of the phone, for quick access.

The QWERTY keyboard does take some getting used to if you're not familiar with BlackBerry phones; the keys are a little smoother than normal as RiM tried to keep the phone as thin as possible. The keyboard has a little more room of play between the edge of the keys and the screen, so your fingers aren't making contact with the edge of the device when you type. 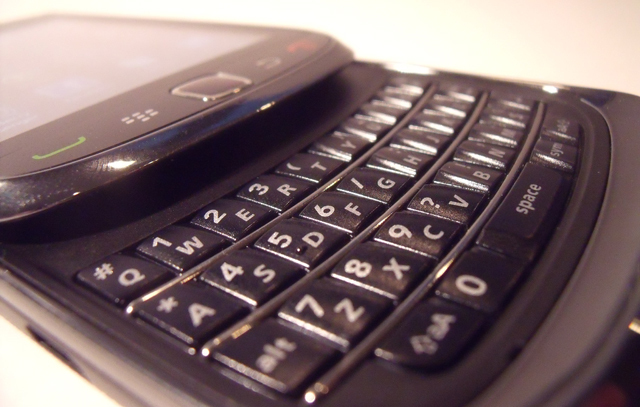 The right hand side of the phone has your standard 3.5mm headphone jack with your standard up and down volume buttons and a convenience key to open up any assigned application, which can be configured in the operating system.

The BlackBerry Torch also has a ribbed, rubber backing, so it doesn't feel slippery in your hand.

Display
The Torch has a high resolution 3.2” HVGA+ touch screen (480x360), with light-sensing and proximity detecting sensors to adjust the screen brightness. A very solid and smooth touch-screen, which has exceptional accuracy compared to other touch-screen smartphones out there.

Camera
Having a sharp camera is needed these days in any mobile phone, so it's no wonder the BlackBerry Torch 9800 features a 5.0 MP camera, with an auto-flash, auto-focus, 2x zoom and has video recording capabilities. Although the still camera and video camera are separate applications on the device, the quality has excellent output. The playback has a lower quality than what can be displayed on your PC, simply because of the screen limitations.

The camera supports up to 2x zoom, which can be controlled by sliding your finger on the screen, but like many smartphone cameras, can not be configured once you are filming. The camera captures colours very vividly, check the gallery at the bottom for some sample phones with the BlackBerry Torch.

RIM has improved upon the shutterlag too of the phone.  Previous versions of the OS suffered from horrendous lag, the Torch has a solid 1 second delay which is better than previous iterations that had 2-3 second lag.  But when compared to other phones like the HTC Incredibele, the Torch feels slow. 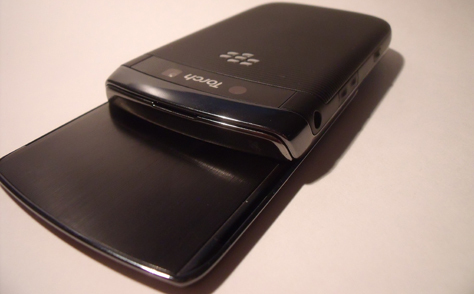 Internal Hardware
A smartphone isn't complete without 3G, WiFi and GPS capabilities, and the BlackBerry Torch 9800 is no exception. The Torch supports tri-band 3G UMTS networks, as well as quad-band GSM/GPRS/EDGE networks. The phone also supports WiFi 802.11b/g/n, for quick surfing at home.

The Torch packs a 624Mhz CPU with 512MB of RAM, with a 4GB internal storage, upgradable to 32GB. The processor is decent for this phone, under light to normal usage. Advanced users might be a little frustrated at times with the processor speed, but it does do a fairly good job overall.

Battery
Even though I've haven't had a long time to thoroughly test out the battery, I haven't noticed any problems with it. The battery does perform well, and gave me a charge of two full days of normal usage before I had to plug it back in again. However, it does come with a 1300 mAhr removable battery, with a 5.5 hour talk time, an 18 day standby, 5.8 hours on UMTS, 30 hours of music playback and 6 hours of video playback time.

The Home Screen has an all new look, with an adjustable menu to show more or less icons and has more room for other things, like your social network feeds. The social feeds include Facebook, Twitter, Google Talk, MySpace, Windows Live Messenger, AIM, Yahoo, and of course, BBM (BlackBerry Messenger). The OS alerts you of any new direct messages or updates through your feeds, which alerts you on the operating system and on the phone itself, through a blinking red light when you have unread feeds.

BlackBerry 6 supports universal search, so you can find contacts, emails, applications and many other things through a quick search. I found this very responsive and helpful when trying to find applications through all the pages on the device.

The all new webkit browser, software that RiM acquired through an external source, works fairly well, including a pinch-to-zoom interface, which makes it very easy to read. It supports multiple tabs, so you can easily flip through different websites. I did experience some problems with the browser, where the page would crash and return me to the home page without giving me any warnings or notifications something occurred.

Music & Video
I found that music through the headphones is very clear, but that depends on your audio quality sample. I was using a 320kbps audio track to test both the headphones and built-in speakers. The phone speakers, including speaker phone is clearer than what I've experience on other phones, such as the BlackBerry Peal and Bold.

The video quality is again limited to the screens resolution, but it does support a wide range of video and audio codecs, including MPEG4, H.263, H.264, WMV3 and AMR-NB, AAC-LC, AAC+, eAAC+, WMA, WMV, Flac, Ogg Vorbis.

BlackBerry 6 supports YouTube and MobiTV, which allows you to watch streaming TV and videos, but is restricted to the United States, so I couldn't test MobiTV. The YouTube application was a bit of a let down, it acts as a shortcut, so it just forwards you to the mobile webpage.

App Store
No smartphone is complete without an app store, something which has become the norm for all mobile devices in the last little while. The BlackBerry Torch isn't any exception, so it does come with a minimal app store, but doesn't look pretty at all. The store does have a variety of free and paid applications. Compared to the Apple App Store on the iPhone, this BlackBerry store does not match up. However, it does get the job done, and allows you to at least play games and use apps on your phone.

My Thoughts
I actually really do like this phone, but I would like to see a slightly faster processor to keep up with the iPhone 4, a higher resolution screen, so I can at least see the photos I've taken clearly. The App Store could use an overhaul, because it's not the most appealing thing in the world, something which might deter me from buying applications if they don't look good.

I do like the touch-screen, with a sliding QWERTY keyboard on the phone. The BlackBerry Torch feels very nice in my hand, and feels well built. The ribbed, rubber backing is a nice feel and addition to the phone, where the iPhone 4 feels very slippery and smooth in your hand, like you're going to drop it at any moment.

Check out our video review of the BlackBerry Torch 9800 below.